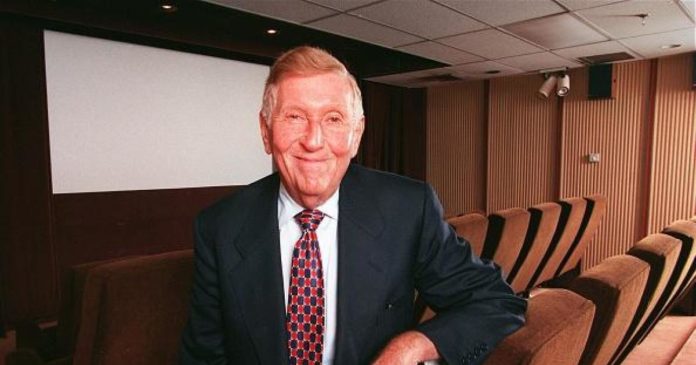 Sumner Redstone, the media legend who built what is now ViacomCBS, died Tuesday at age 97, the company confirmed in a statement Wednesday.

“Sumner was a true industry titan, a brilliant and driven pioneer whose influence on the media and entertainment landscape cannot be overstated,” said a statement from ViacomCBS CEO Bob Bakish.

ViacomCBS Chair Shari Redstone said in a statement, “My father led an extraordinary life that not only shaped entertainment as we know it today, but created an incredible family legacy. Through it all, we shared a great love for one another and he was a wonderful father, grandfather and great-grandfather. I am so proud to be his daughter and I will miss him always.”

Redstone was born in 1923 and over several decades built a media empire.

He got his start in media in 1954 when he joined his family’s small business running a few drive-in movie theaters. Over the next few decades, he turned the business into one of the nation’s largest movie-theater chains, National Amusements.

“Sumner astutely anticipated the ways in which the media industry would evolve, shaped by technological innovation and changing consumer tastes, and recognized the enormous potential of both Viacom and CBS,” said the note from Bakish.

“Over the course of his distinguished life and career, Sumner played a critical role in shaping the landscape of the modern media and entertainment industry,” National Amusements said in a statement. “Sumner was a man of unrivaled passion and perseverance, who devoted his life to his belief in the power of content. With his passing, the media industry he loved so dearly loses one of its great champions.”

“In 1987, when I purchased Viacom, it was a struggling cable television programming venture with a few undeveloped and overlooked assets that everyone encouraged me to sell,” Redstone said in a speech at Boston University in 2007. “You know, they said that MTV was a fad. They said that Nickelodeon could never make it because who was interested in a kids’ channel … in your life, in the final analysis, you have to follow your own instincts.”

Redstone’s net worth is $3 billion, according to Forbes.

Redstone’s daughter, Shari Redstone, 66, serves as chair of ViacomCBS’ board of directors after last year’s merger between Viacom and CBS, which had previously merged in 1999 but broke apart in 2005.

Redstone had been in ailing health for years, and his health and competency had been the focus of court battles.

In 2019, he settled a series of lawsuits with a former girlfriend, according to the Associated Press. Sumner said in the lawsuits that he had given her tens of millions of dollars in their time together, as well as control of his health decisions. The legal fight had largely centered on whether Redstone was able to testify and make decisions for himself, the AP said.

But Redstone was also famously brash and resilient. In 1979, he was badly burned in a fire at the Copley Plaza Hotel in Boston. Redstone later recounted being “enveloped in flames” before making it to the third-floor window, which he hung out of before being rescued by the fire department. He suffered third-degree burns on nearly half of his body.

“The most exciting things that have happened to me in my professional life have occurred after the fire,” he would later say in his 2001 book, “A Passion to Win.” “But not because of it. Life begins whenever you want it to begin.”

In 2014, at age 90, when asked by the Hollywood Reporter if he had any regrets in life, he replied, “I regret that I won’t live forever. Although I’d like to.”

Asked who his most trusted person was, he answered: “I trust in many people, but the one I trust the most is myself.”