Home Sport ‘Women’s sport has been left on the bench’ 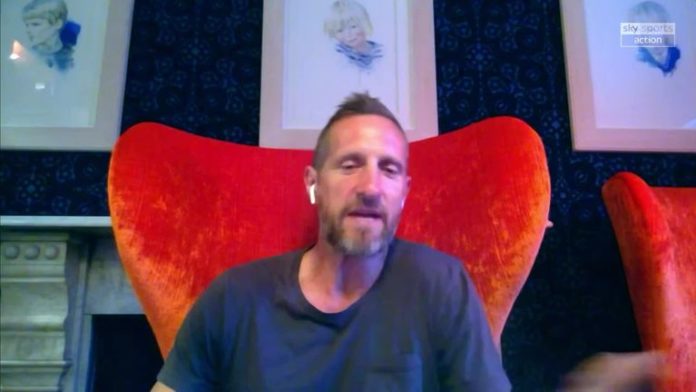 “Women’s sport has been left on the bench. We have to find a way to get women’s sport back up and running so it can continue to inspire the next generation, to make sure we don’t lose a cohort because of this disastrous cancelled summer.”

The coronavirus pandemic has affected sport across the world, and women’s sport is arguably the most at risk.

Major cycling, football and rugby events have been cancelled or postponed because of the crisis.

MPs recently warned that the cancellation of these events means women are less likely to be inspired to play sport, and urged the government not to sacrifice the women’s game in favour of the men’s.

The future looks uncertain, but is there a way back? Will Greenwood and Ebony Rainford-Brent joined Caroline Barker on Sky Sports for a special programme on Wednesday evening.

‘Women’s sport has been left on the bench’

“We’ll come back stronger,” were the words of the FA’s Kelly Simmons within the announcement that the WSL’s final standings would be reached by a basic points-per-game basis.

The final positions in the Tyrrells Premier 15s were calculated on a ‘best playing record formula’ after its season was terminated in March.

At the end of May, the Vitality Netball Superleague had the results of their 2020 matches deemed null and void, and now some clubs are having to reach out to fans in order to try and raise the funds needed to keep them afloat.

“Anyone with a fingernail of common sense can see the role women’s sport plays in our society,” Will Greenwood told The Women’s Sport Debate.

“I think what’s happened off the back of COVID-19 is while men have been given VIP access to the stadiums and the funds to get back on the field, women’s sport has been left on the bench and disproportionately so.

“We have to find a way to get women’s sport back up and running so it can continue to inspire the next generation, to make sure we don’t lose a cohort because of this disastrous cancelled summer.”

‘If I was a man I wouldn’t be worried’

Demands for equal pay in football have grown louder following the successful staging of the Women’s World Cup in France last year, with men continuing to earn significantly higher wages and prize money.

West Ham captain Gilly Flaherty, who revealed Women’s Super League players urged the Football Association to cancel the 2019/20 season, says the financial situation within the women’s game has caused her concern during the pandemic.

“Me and my partner have had several conversations, and we just said if I was a man I wouldn’t even be worried,” she said.

“The level that I’m at, compared to the men’s game and the wages, I don’t personally think that’s going to change in the sense that I don’t think we’ll ever earn what the men earn, which is understandable.

“Okay we play the same sport but obviously you’re looking at it from a business point of view and the attendances – you can understand the argument.

“But, for me I’m very fortunate enough that I can do this as a job and that I can get paid to do it.”

Funding for women’s sport also continues to be an issue. Two months after the Premier 15s season was terminated, Tyrrells – the competition’s significant investors – announced their decision to “redirect” their marketing spend “in line with overarching business objectives”.

The Digital, Culture, Media and Sport Committee (DCMS) has criticised the lack of funding for women’s elite sports, and Ebony Rainford-Brent insists women’s sport must make the most of its commercial potential.

“I don’t think we focus on the data enough and what I mean by that is the uplift data, the data that shows how big the market is, how big the potential is to grow the game,” she said.

“Cricket for example over the last year has seen some amazing statistics that to me blow my mind and suggest ‘can we invest more?’

“So an example would be the ICC – 1.1 billion video views on the ICC digital channel. Now if you’re a sponsor and you heard that data would you not think straight away ‘there is something to get involved in, there is something moving.’ You think about the 2017 World Cup we had here in England which had a packed audience as well, on Sky that was the most viewed cricket game that summer.

“I came back from Australia earlier in the year where there was a crowd of 86,000 people watching, one of the most watched female sporting events of all time.

“To make women’s sport commercially viable and to attract sponsors, I don’t think we get the data out there enough. These numbers are powerful. You go to any sponsor and tell them this is what the sport is offering, they would snap your hands off.

“I think under crisis we now need to become super focused about making women’s sport commercially viable on its own. I think we’ve done a brilliant job of bringing it to this place now where the expectation is higher and the visibility is higher, but now more than ever we need to be driving this data to all sponsors so they know that women’s sport may actually offer a better investment.”

Why women’s sport is good for business

UK Athletics chief executive Joanna Coates joined the debate and like Rainford-Brent, believes women’s sport has huge commercial potential with an opportunity to reach a much wider audience.

“Women’s sport is fantastic for business, and I think we’ve proved that with our partnerships with both Vitality and Nike,” she said. “It’s great for business because it really opens up those brands to new markets.

“That’s the key thing; we are agile. There’s probably not the restrictions that there are when you look at the male game, but equally it really is about opening those new markets.

“We’re talking to a brand new audience, you’re talking to masses of women and girls who don’t realise that women make up 50 per cent of the decision makers in this country and brands want to get to them.

“An organisation like Vitality would not have renewed after three years and doubled their investment in the sport if it didn’t give them a return.

“So make it an appealing offer; offer the food that women and girls want to buy. Offer the merchandise they want to buy.

“I do think as governing bodies though we have a responsibility to turn women into fans of sport. I think that’s a really big responsibility for us.”

What does the future hold?

UK Sport chief executive Sally Munday recently told Sky Sports she believes women’s sport is ripe for incredible growth and the disruption from coronavirus will be just a short-term “blip”.

Will Greenwood thinks elite male athletes must use their privileged position to support their female counterparts.

“You could really lead the charge on the men’s side of it. The men’s players could stand by their sisters and I ask the question to any privileged male athlete – ‘if you remove the women from your life, how far do you get?’

“They’re in it together. You can’t compare apples to apples, men’s dynamism with women’s dynamism. Men’s sport had a leg up 30 years ago, you’ve got to help women’s sport now.”