Home World World’s tallest prefab skyscrapers will rise in Singapore — but they’re being... 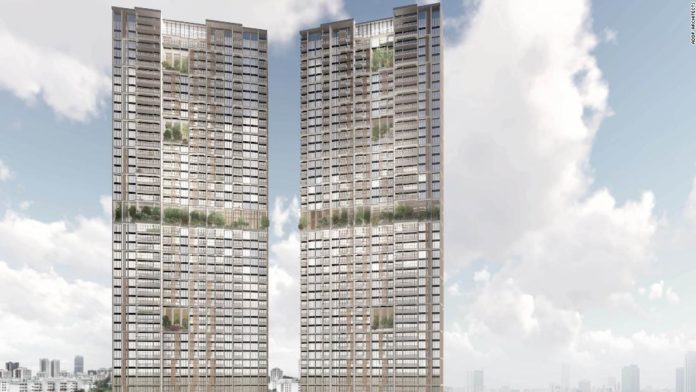 A pair of skyscrapers are set to become the tallest prefabricated buildings in the world.

And while the two 192-meter-tall (630 feet) towers will rise in densely populated Singapore, large parts of the structures are being built over the border in Malaysia.

The towers’ facades will feature balconies, sun-shading screens and a number of “sky terraces” filled with trees and plant life. Credit: ADDP Architects

The individual modules are factory-made in Senai, Malaysia, where a series of six-sided boxes are cast in concrete. The units are then transported to a facility in Singapore to be fitted out and furnished before being moved to the construction site.

By the time they arrive, the boxes are 80% complete, according to ADDP Architects. They are then lifted into position by a crane and “stitched up” to form a strong, load-bearing frame, said one of the firm’s associate partners, Markus Cheng Thuan Hann. Final touches, such as doors, are added afterward, the architect said.

“It’s like a car manufacturing concept, but for the building industry,” he added in a phone interview.

Limiting the amount of construction work carried out at the site, which is located in Singapore’s residential Bukit Merah district, can help minimize disruption to those living nearby, Hann said.

“But this construction (method) really helps to reduce noise,” he said, of the benefit to the surrounding public housing estates. “And it can reduce waste… because the workmanship in a factory is much better controlled.”

The area surrounding the towers is described by the architects as “an inclusive oasis-like community space.” Credit: ADDP Architects

Another unforeseen benefit has emerged in the light of Covid-19: Fewer people are needed at the construction site at any one time. “It’s easier to control safe distancing and logistical planning in the factory, rather than having all the (workers) on site,” Hann pointed out.

The prefabrication industry first boomed in Europe and America during the post-war period, with urban planners using it to quickly and affordably address housing shortages. But the market for prefabs is now increasingly dominated by the Asia-Pacific region.

The building method has proven especially popular in Singapore, with the country’s Building and Construction Authority actively encouraging the use of PPVC, citing an 8% cost saving and a 40% boost in productivity versus traditional construction means (it credits the latter to more productive “manpower,” and “time savings”). Since 2014, the agency has even made prefabrication a requirement for certain sites.

Construction on Avenue South Residences has already begun, and the developers hope to finish the project by the first quarter of 2023. Once complete, the towers’ facades will feature balconies, sun-shading screens and a number of “sky terraces” filled with trees and plant life.

The project is set to overtake Singapore’s — and the world’s — current tallest prefab, the 140-meter-high (459 feet) Clement Canopy, which was also designed by ADDP Architects. Among the world’s other tallest modular buildings is a 135-meter (443 feet) tower in Croydon, South London, and a 109-meter (359 feet) residential development in New York.

The individual modules of the building consist of six-sided boxes cast in concrete. Credit: ADDP Architects

“We are (building upwards) progressively, working with the engineers, studying 3D simulations to make sure the design can withstand the wind loads,” he said. “But I think 56 stories will be the tallest in Singapore for the time being. I don’t think we will stretch any further.

“It’s concrete, and we have to lift it very high. But depending on if new technology or more lightweight construction (is developed), maybe there’s a chance we can go higher.”