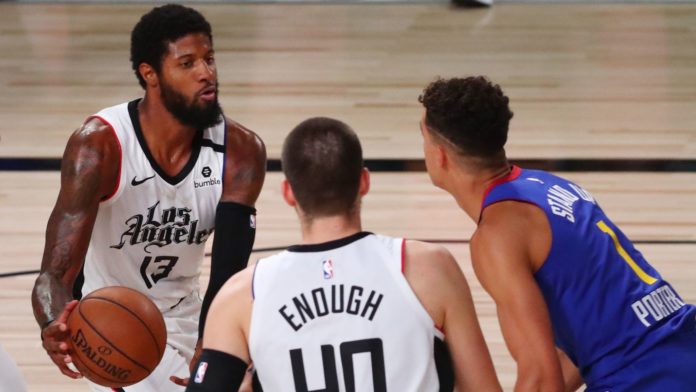 Paul George scored 27 points and Kawhi Leonard added 26 as the LA Clippers defeated the Denver Nuggets to clinch the Western Conference’s No 2 seed.

Lou Williams had 23 points and seven assists off the bench for the Clippers (48-23), who clinched the No 2 seed in the Western Conference. They will meet the Dallas Mavericks in the first round of the NBA playoffs. The Nuggets (46-26) will be the conference’s No 3 seed.

Ivica Zubac had 15 points on 7-of-9 shooting and grabbed 12 rebounds for the Clippers. Reserve forward Jerami Grant scored 25 points and pulled down six rebounds for Denver. Nikola Jokic finished with 17 points, 13 assists and seven rebounds.

For the game, the Clippers made 54.1 per cent of their shots to 49.4 per cent for the Nuggets. Los Angeles committed only eight turnovers to 12 for Denver.

Darius Bazley scored 16 of his 21 points in the fourth quarter and Mike Muscala hit two three-pointers in the final minute to lift the Oklahoma City Thunder to a 116-115, come-from-behind win over the Miami Heat.

The Thunder trailed by as many as 22 points in the fourth period but outscored the Heat 34-15 in the quarter.

The two late treys produced Muscala’s only points of the night. The first tied the game with 34.8 seconds to play. After Miami regained the lead on a Solomon Hill lay-up with 11.6 seconds to go, Muscala hit another three-pointer with 5.2 seconds remaining to put the Thunder ahead for the first time since the opening moments of the game.

Tyler Herro’s three-pointer hit attempt off the front of the rim at the buzzer to seal Oklahoma City’s win. Herro finished with a career-high 30 points.

Miami (44-28) will face Indiana in the first round after the Pacers beat Houston earlier in the day to clinch at least the No 5 seed in the Eastern Conference. The winner of Friday’s Heat-Pacers seeding-game finale will be the No 4 seed, with the loser the No 5 seed.

Oklahoma City (44-27) moved into a tie with Houston for the No 4 seed in the Western Conference. The Thunder end their seeding-game schedule on Friday against the LA Clippers.

Doug McDermott scored 10 of his 16 points in the fourth quarter as the Indiana Pacers grabbed a double-digit lead and then held off a late rampage by James Harden to beat the Houston Rockets 108-104 in the NBA bubble.

By virtue of a win in their second-to-last regular-season game, Indiana (44-28) clinched the fifth seed in the Eastern Conference and a first-round playoff match-up with the fourth-seeded Miami Heat. The Pacers and Heat meet in the regular-season finale on Friday afternoon.

Meanwhile, despite the loss, Houston (44-27) remained in the mix for the match-up of fourth and fifth seeds in the West. The Rockets close out the regular season on Friday against Philadelphia.

After Houston, riding five early three-pointers, scored 20 of the game’s first 25 points, the match-up was tightly contested until the Pacers gradually pulled away in the fourth quarter. But after a McDermott lay-up increased the Indiana lead to 104-90 with 5:05 to go, Harden put on a one-man show that almost brought Houston all the way back.

He had a pair of three-pointers among 11 points in a 14-2 flurry that gave Houston a chance at 106-104 with 27.6 seconds left. But Indiana’s Justin Holiday snatched the rebound on a missed three-pointer by team-mate Victor Oladipo and was fouled with 6.5 seconds remaining, denying Houston a potential go-ahead opportunity. Holiday dropped in a pair of free throws to ice the win, Indiana’s fifth in seven games since the restart.

Harden finished with a game-high 45 points to go with a career-high-tying 17 rebounds. He missed a triple-double by one assist. Holiday and Myles Turner paced the Pacers with 18 points apiece. Edmond Sumner chipped in with a season-high 17 points, while Oladipo joined McDermott with 16.

The Philadelphia 76ers welcomed back Joel Embiid for a first-half cameo, then blew a late seven-point lead and watched as Toronto’s Stanley Johnson hit a tie-breaking follow-shot with 5.9 seconds remaining for a 125-121 victory.

Embiid, who injured his left ankle on Sunday against Portland and sat out Tuesday’s front end of a back-to-back against Phoenix, played 14 minutes in the first half, during which he had five points and nine rebounds. He sat out the final 24 minutes.

The 76ers held the upper hand for most of the time when Embiid was on the floor. They built a 16-point lead within 11 minutes, then led by as many as 14 in the second quarter before settling for a 62-55 half-time advantage.

The Raptors got three-pointers from Norman Powell and Pascal Siakam, and a two-pointer from Powell in an eight-point run to start the third quarter, putting them up 63-62. The clubs then battled on even terms until the 76ers, down 95-94, got three free throws and a three-point hoop in a personal six-point run by Furkan Korkmaz to go up 100-95 with 9:48 remaining.

But Dewan Hernandez led a late Raptors flurry with two- and three-point baskets and a free throw, and when Norman Pelle blocked his lay-up with 8.5 seconds left, Johnson was there for the put-back and a 123-121 lead.

Chris Boucher and Kyle Lowry shared team-high scoring honours for the Raptors with 19 points apiece. Tobias Harris had a game-high 22 points and Korkmaz 21 for Philadelphia.