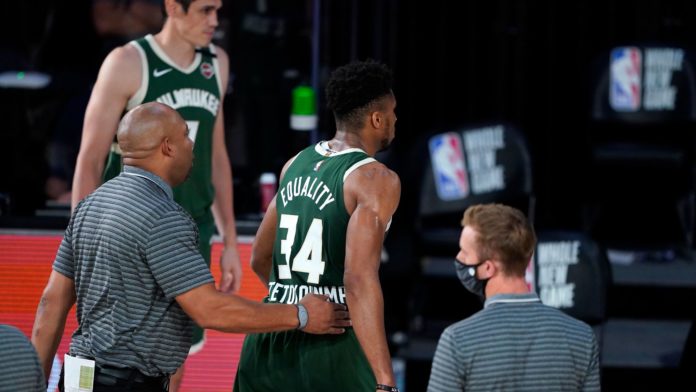 Milwaukee Bucks forward Giannis Antetokounmpo has been suspended one game without pay for head-butting Washington Wizards center Moritz Wagner during a stoppage in play, the NBA announced on Wednesday.

The reigning league MVP was ejected from Tuesday night’s contest against the Washington Wizards following the incident.

Antetokounmpo will miss Milwaukee’s final seeding game against the Memphis Grizzlies but will be back for the first round of the playoffs, which start on August 17. The Bucks will face the Orlando Magic in Round 1.

Antetokounmpo was assessed a flagrant 2 foul, which merits an automatic ejection, after head-butting Wizards big man Wagner midway through the second quarter of a 126-113 win.

The incident occurred near the Milwaukee hoop after Antetokounmpo was whistled for a charging foul for running into Wagner, a call that Bucks head coach Mike Budenholzer challenged and lost. The two players exchanged words briefly before Antetokounmpo lowered his head and drove his forehead into Wagner’s left temple.

Antetokounmpo was apologetic after the game.

Had he not been suspended, Antetokounmpo might have rested against Memphis anyway, as the Bucks have long since locked up the top seed in the Eastern Conference.