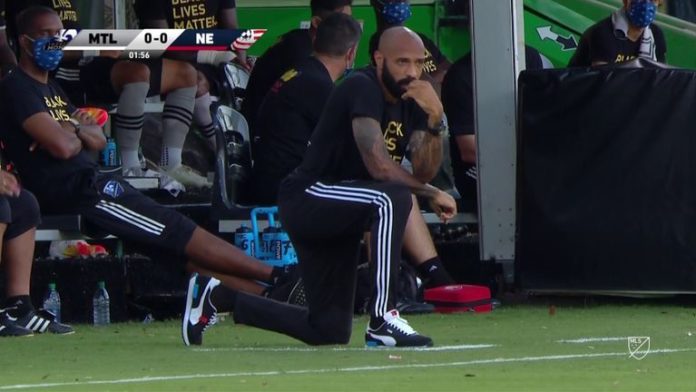 “They don’t understand why we’re kneeling. They can’t see the reason. They think we’re the ignorant ones,” says USA international Cannon

Both sides took the opportunity to protest against racial injustice before their MLS match in Frisco, Texas, but the gesture was overshadowed by booing.

FC Dallas right-back Cannon even revealed his team-mate Ryan Hollingshead turned to him and apologised.

“You can’t even have support from your own fans in your own stadium. It’s baffling to me,” Cannon said.

“As a team, we try to give the best possible product on the field and these last six months have been absolute hell for us. Absolute hell.”

Dallas and Nashville had not played a game since the season was suspended on March 12 because of the coronavirus.

While MLS’ other teams played in the MLS Is Back tournament in Florida over the past month, Dallas and Nashville were forced to withdraw before the start because of positive COVID-19 tests from both teams.

Both clubs met as the league restarts the regular season and some of the games will include fans if local jurisdictions allow it.

Just over 5,000 people were allowed to attend the match at Toyota Stadium and Cannon admitted he felt let down by a section of ‘ignorant fans’.

“We had someone chanting USA, but they don’t understand what kneeling means,” said the 22-year-old.

“They don’t understand why we’re kneeling. They can’t see the reason. They think we’re the ignorant ones.

“It’s incredibly frustrating. I’m sorry to have this tone, but you have to call it for what it is.

“It hurts me because I love our fans, I love this club, and I want to see the support that the league has given us, that everyone has given us, from our fans.”

Nashville won the game 1-0 and the two teams will meet again on Sunday.