Home Sport Lewis trying to ‘forget all the scars’ 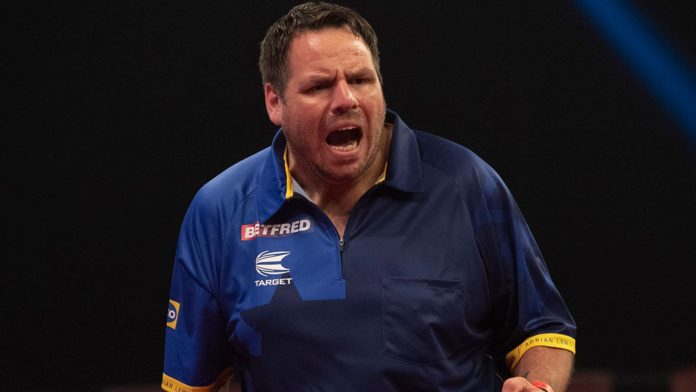 “I’m trying to start again really, forget all the scars you’ve had over the years by getting beaten and put everything to the back of your mind and focus on what’s upcoming.”

Adrian Lewis insists he’s trying to ‘start again’ and forget the mental scars that have plagued him over recent years, following his encouraging return to form at last month’s World Matchplay.

Lewis made his big-stage return with a quarter-final appearance at the World Matchplay, defeating veteran Steve Beaton and Gerwyn Price’s conqueror Danny Noppert, only to succumb to eventual champion Dimitri Van den Bergh 16-12.

The 35-year-old is without a PDC ranking title since March 2019, but his performances in Milton Keynes have given him a renewed sense of optimism ahead of a congested second half of the season.

The two-time world champion posted his highest televised average since December 2018 in his opener against Beaton, before bettering that performance against Noppert. Now he is targeting a return to the world’s top ten in the near future.

“I’ve got expectations,” Lewis told the PDC’s official website. “I want to maintain my form and then try to climb up as high as I can coming into the World Championship.

“It’s all about confidence. I’ve always said that 95% is in your head because if your head’s not right you don’t seem to perform. Little things can deter you from your full 100% performance. It is a mental game and you’ve got to be in the right place mentally.

“I’m trying to start again really, forget all the scars you’ve had over the years by getting beaten and put everything to the back of your mind and focus on what’s upcoming really.”

‘Jackpot’ is renowned for being one of the most naturally talented players to have ever played the game and his throw looked back to its languid best at the Matchplay.

The Stoke-on-Trent star also underwent a strict fitness regime during lockdown which saw him lose over three stone, and he believes that combining a more healthy lifestyle with competitive action will help him reap the rewards.

“I’ve got to look at the positives and my throw is back,” added the 35-year-old. “It feels a lot more smooth and not as jerky, which is going to play a big part for the rest of the season.

“When you’re practising on your own during lockdown, you’re not playing any competitions so it was always going to be tough coming straight back into it after four months off, but I’ve done well and I can’t complain with how I played.”

“I was playing so poorly and I thought that this could be my last Matchplay if I don’t qualify again for next year’s.”

Lewis on his form…

Lewis has been an ever-present at the Matchplay since making his debut in 2005, although he concedes that he feared for his future among the world’s elite following a disappointing return during the PDC’s inaugural Summer Series.

The 2013 Matchplay runner-up was in danger of relinquishing his place in the world’s top 16 if he suffered an early exit, but now he’s looking up rather than down following a positive week’s work in Milton Keynes.

“It wasn’t so much a worry but the only time I started thinking about it was before the World Matchplay because I was playing so poorly and I thought that this could be my last Matchplay if I don’t qualify again for next year’s,” he added.

“But I’m looking at it in a whole different way now, and I want to push on again. My form’s good and everything else is good, so I’ve just got to move forward.

“You’ve got to do the damage in these tournaments, the TV tournaments and the ranking events, where you can pick up the most money.

“If you win a couple of floor tournaments it doesn’t really affect your ranking as such. Fortunately for me I made a quarter-final this time and who’s to say I can’t go further.”

Darts is back on Sky Sports later this month, as the Premier League returns with six consecutive nights of action getting under way on Tuesday, August 25.