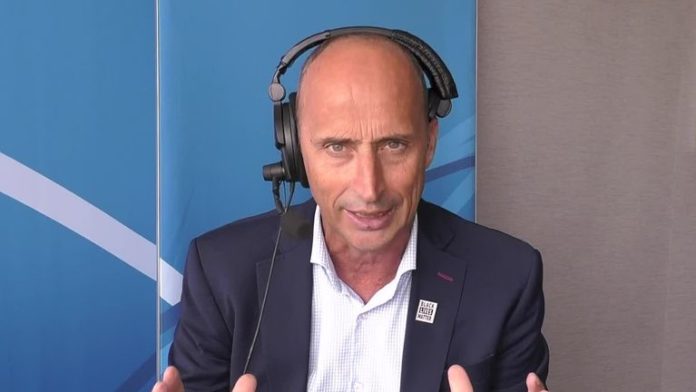 Seamer James Anderson put his frustrations behind him with a double strike to help England reduce Pakistan to 126-5 on day one of the second #raisethebat Test at a rain-hit Ageas Bowl.

Anderson, 38, revealed earlier in the week how he became emotional during his first Test struggles as he accrued match figures of 1-97 – his worst return in a home Test since 2015.

But England’s leading wicket-taker of all time rediscovered his rhythm to claim 2-35 and swell his overall tally of victims to 592 after Pakistan had chosen to bat in humid conditions.

Skipper Joe Root indicated on Wednesday that Anderson wouldn’t be dropped and he was as good as his word, England also choosing Curran from their battery of seamers to play in place of the rested Jofra Archer while Zak Crawley came in at three with Ben Stokes absent for family reasons.

Anderson was quickly into his work, trapping Shan Masood lbw with his eighth ball of the day to remove the left-hander for a seventh time in their head-to-head contest at an average cost of 4.85 runs.

Pakistan might have lost a second early wicket only for third slip Dom Sibley to shell an edge off Broad when Abid had scored just one.

The opener enjoyed a second life on 21 – Rory Burns this time fumbling a rising chance at second slip off the bowling of Woakes, shortly after the seamer’s second delivery had squeezed through Azhar Ali’s defences on seven and rolled onto the stumps without dislodging a bail.

Only once before have Pakistan managed to overturn a 1-0 deficit in a three-match Test series – against Zimbabwe in 1995 – and both Azhar and Abid battled hard to build a platform before rain forced lunch to be taken early at 62-1.

Azhar brought up their 50-run stand from 110 balls with a powerful back-foot drive for four off Anderson but it was a rare shot of authority from a batsman with one score over 40 in his last 17 knocks.

The afternoon session began with no time lost but cloudy skies became increasingly leaden-looking before there was another interruption after 40 minutes’ play.

In that time Burns made partial amends for his earlier mishap by holding a calf-high catch to his right to send back Azhar, prompting jubilant celebrations from Anderson.

The bad weather left Abid stranded on 49no for 100 minutes before, moments after the resumption at 4pm, the opener edged Anderson through the slip cordon to reach his fifty off 99 deliveries.

Pakistan’s Abid Ali celebrates his half-century , which came up off 99 deliveries

A third Test ton in seven innings was not to be, however, as Curran produced a delivery that bounced as it moved across the right-hander and Burns took the catch in his midriff.

A total of 102-3 became 117-4 when Asad Shafiq (five) pushed at Broad and was caught by Sibley at third slip, bringing Fawad Alam in for his first Test appearance since 2009.

The 34-year-old, selected in place of Shadab Khan to bolster the batting, came in boasting a first-class average of 56.48 which is the sixth highest recorded since December 2009 by batsmen who have scored at least 5,000 runs.

But after waiting 11 years for his fourth cap, Fawad’s stay was short-lived – his square-open stance not distracting Woakes, who trapped him lbw on review for a fourth-ball duck.

The rain returned minutes before 5pm and, although it cleared after half-an-hour, bad light then prevented the players returning from the pavilion and it was no surprise when play was abandoned for the day at 6.30pm.

Watch live coverage of day two of the second #raisethebat Test between England and Pakistan live on Sky Sports Cricket from 10.30am on Friday.