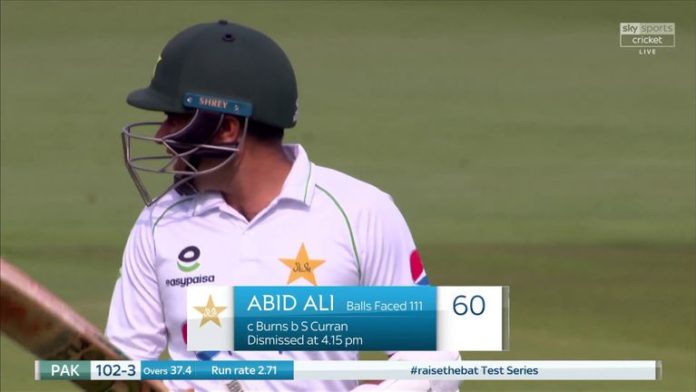 “I was pretty shocked with the stuff that was going on about him. He is a world-class bowler and anyone who doubts him I don’t think is very sensible”

England’s James Anderson proved he is still world class with his performance on day one of the second Test against Pakistan, says Sam Curran.

Anderson denied rumours he would retire from Test cricket earlier this week after averaging 41.16 in his first three Test matches of the summer.

The 38-year-old picked up two scalps from 15 overs on a rain-affected first day at The Ageas Bowl to move onto 592 Test wickets in his career and help reduce Pakistan to 126-5 by stumps.

All-rounder Curran said: “I was pretty shocked with the stuff that was going on about him. He is a world-class bowler and anyone who doubts him I don’t think is very sensible.

“He proved how world-class he is and I am sure he will go on and get a five-for and creep up to 600, which is really exciting for all of us.

“I am enjoying having him around and learning from him. He helped me through my spells and picking his brains is great for me.”

Curran was drafted into the England side in place of the rested Jofra Archer as he made his second Test appearance of the summer, having played the second game of the series against West Indies.

The left-armer says he has found it tough being left out and not being able to leave the team’s bio-secure bubble to play county cricket for Surrey but insists his team-mates have kept his spirits up.

“Anytime you put on an England shirt or a Surrey shirt you try and do your best. It is great to be back in the side and contributing again,” said Curran, who dismissed Abid Ali (60) after the opener had been dropped on 0 and 21 by Dom Sibley and Rory Burns respectively in the slip cordon.

“It is very strange times and a tricky situation when you don’t play – you don’t get to play for your county when you are not selected. If you don’t get selected, you’re back to your hotel room. Things like that are very difficult.

“It’s the new normal so we have to get on with it and keep training hard. I feel for the guys who aren’t playing. We have such a great squad and the boys are lifting the ones that aren’t playing and keeping them involved.”

Pakistan – helped by Sibley and Burns’ errors – reached 78-1 on a weather-affected day in Southampton after electing to bat but then lost four wickets for 42 runs as England rallied.

“It was one of those days that felt really humid – the forecast all week is for thunderstorms around,” added Curran, after rain and bad light allowed only 45.4 overs to be bowled.

“The ball did more later on in the innings and with them being 78-1 and a couple of drops we did really well to finish where we did. I think it was a good day for the bowlers in general.

“I thought we bowled really well as a group and everyone chipped in with wickets. We spoke about sticking together as a unit and luckily it came off.”

Watch day two of the second #raisethebat Test between England and Pakistan live on Sky Sports Cricket from 10.30am on Friday.

Quarantine scrapped for fully vaccinated travellers arriving from US and EU