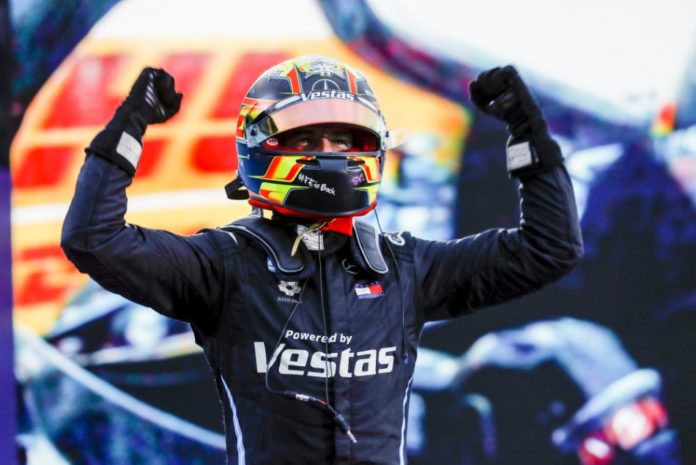 Stoffel Vandoorne led a Mercedes-Benz EQ one-two as the 2019/20 ABB FIA Formula E Championship reached its conclusion at the final Berlin E-Prix today (13 August), with the Belgian’s breakthrough victory vaulting him up to second in the standings.

With a mixed-up grid – and five of the nine contenders for the championship runner-up spoils starting right at the rear – the scene was set for a fascinating finale on the extended Tempelhof Airport circuit.

From his second career Formula E pole position, Vandoorne was in imperious form from the moment the lights went out, and he only briefly relinquished his lead when he employed ‘ATTACK MODE’. That aside, the 28-year-old was untroubled, and his superb maiden triumph made it five different winners from six races in Berlin.

Behind, former champion Sébastien Buemi and series rookie Nyck de Vries waged a fierce duel for second place. Buemi – another driver with designs on the championship runner-up spot – held the advantage for the majority of the race for Nissan e.DAMS, despite the pair trading positions on a number of occasions, but de Vries had an ace up his sleeve.

In an ultra-efficient performance, the Dutchman saved more energy than his Swiss rival while keeping the pressure on, and after maturely biding his time, he finally made his move in the closing stages with a bold pass to steal second place. The result marked the 25-year-old’s first podium finish in Formula E and enabled Mercedes-Benz EQ to climb from fifth to third in the final Teams’ table.

Buemi proceeded to hold off a resurgent René Rast for third to leap from eighth to fourth in the Drivers’ Championship, just a point ahead of stablemate Oliver Rowland, whose Wednesday success must have felt like a distant memory as the Briton started at the tail of the field and could make little progress before retiring with ten minutes remaining.

After losing a position to de Vries on the first lap, Rast claimed a solid fourth-place finish for Audi Sport ABT Schaeffler ahead of Sam Bird, who charged up the order from 14th on the grid in his last appearance for Envision Virgin Racing at the end of a six-year stint. Having economised on his energy early on, the Briton enjoyed an excellent end to the race to pick his rivals off and climb to fifth.

Lucas Di Grassi fought his way past Neel Jani (TAG Heuer Porsche) and Sérgio Sette Câmara (GEOX Dragon) in the opening stages, before engaging in a late battle with Robin Frijns. It took the Audi Sport ABT Schaeffler man two attempts to find a way past after his initial attack was rebuffed, but he finally got the job done by selling the Envision Virgin Racing driver a dummy into Turn Seven before diving to the inside to snatch sixth position.

Having for a long time run inside the top five, Frijns dropped out of contention towards the end due to a puncture, with the Dutchman’s misfortune elevating Jean-Éric Vergne to seventh. Both the Frenchman and his team-mate – recently-crowned champion António Félix da Costa – had started at the back of the pack, but Vergne produced a feisty effort that lifted him into the top ten by lap 25 and he would gain three more places by the time the flag fell.

Da Costa wound up two spots further back in ninth – the DS Techeetah duo sandwiching the Mahindra Racing car of Alex Lynn – with Edoardo Mortara completing the points finishers in tenth, as the ROKiT Venturi Racing ace slipped down the field slightly after a bright start.

‘We had the perfect race, no threats from behind, Seb was always close but we had him under control. We couldn’t have dreamt of a better way to finish the season than with a 1-2 for Mercedes-Benz EQ Formula E Team. Being second in the championship it’s definitely a bonus. Over the past week we had showed we had a good race pace but to execute that from the front whilst leading the race it’s quite different. I’m super happy we managed to pull that off. The whole team has done a fantastic job, I have been struggling in qualifying in the past couple of races but today everything was picture perfect!’

‘I feel so relieved, it feels like a huge weight has been lifted off my shoulders. We’ve done a great job with energy management, and that allowed me to create an energy advantage which led me behind Stoffel. We’ve come close to the podium in many occasions this season and to finally achieve this goal on our last day here in Berlin it’s very satisfying.’

‘We weren’t quick enough today. I didn’t have the pace, we tried something new on the setup and maybe it wasn’t the right way to go but at the end we still managed to have a podium finish and a clean race. I think I took the ATTACK MODE at the wrong time, maybe if I had waited longer it would’ve been better. I’m happy for the team we’re second in the team standing and that’s definitely a great achievement!’