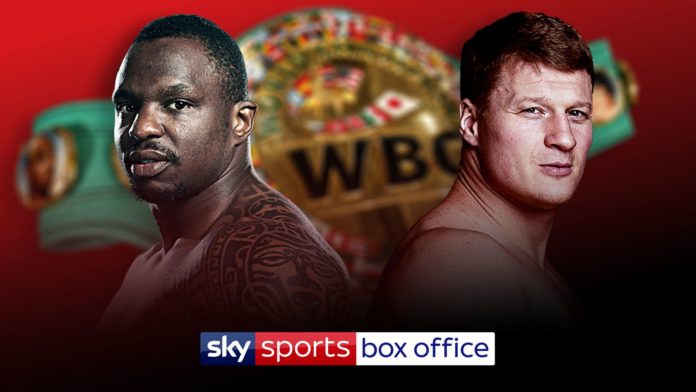 The WBC’s prestigious ‘Diamond’ belt will also be at stake when Dillian Whyte battles Alexander Povetkin in the finale of ‘Fight Camp’.

Whyte defends his WBC ‘interim’ heavyweight title against Povetkin on August 22, live on Sky Sports Box Office, and the governing body will also present the WBC ‘Diamond’ belt to the winner in recognition of the fight’s significance.

The Brixton man also risks his status as the WBC mandatory challenger, with the WBC confirming that the winner of Tyson Fury’s expected third fight with Deontay Wilder must defend the WBC belt against Whyte in early 2021.

🗣️“The next fight is Fury-Wilder and the winner to face Dillian Whyte, if he beats Povetkin.”

The WBC have created their first ever WBC ‘Diamond’ belt for a heavyweight bout, and past recipients of the title include Filipino star Manny Pacquiao following his 12th round stoppage of Miguel Cotto in November 2009.

“I’m very excited about it,” WBC president Mauricio Sulaiman told Sky Sports. “I believe that this fight has all the merits for the WBC to award the prestigious ‘Diamond’ belt.

“Both are sensational fighters. Povetkin and Whyte are former ‘Silver’ champions of the WBC. They have been training in extreme circumstances and they are very professional.

“The WBC is delighted to be part of the fight as the WBC ‘interim’ championship and also to award the ‘Diamond’ belt, which is a special trophy to recognise this great bout.”

Whyte had previously welcomed a fight against Fury for the WBC ‘Diamond’ belt in May 2019, but his British rival instead fought Tom Schwarz in Las Vegas that summer.

On the same night as Whyte-Povetkin, Ireland’s Katie Taylor defends her WBC, IBF, WBA and WBO lightweight belts against Delfine Persoon in a hotly anticipated rematch at Matchroom Boxing’s Brentwood base.