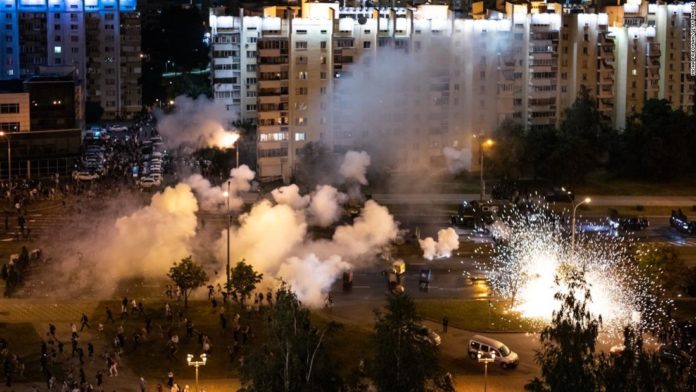 The protesters are among the thousands of people who were arrested in the sometimes violent unrest that has rocked the former Soviet republic since its residential election on Sunday. Exit polls showed that Alexander Lukashenko, who has ruled Belarus for 26 years, received 80% of the vote, but opposition groups claim the election was marred by fraud to keep Lukashenko in power.
Lukashenko’s government had already been accused of responding to the protests with disproportionate force and violence, but the accusations of mistreating people behind bars has prompted renewed public outrage toward the government.
A woman named Olesya told CNN that she was arrested Sunday while walking down the street alongside her boyfriend in the capital, Minsk.
She said she was forced forced to strip naked alongside other women before being searched at a detention center. Olesya, who declined to give her last name for safety reasons, said she was then put in a small cell with 17 other women. All of them were given one water bottle and no food and forced to sleep on the floor or a small table.
The guards periodically cut off their access to water to silence them. They also denied medical assistance to one of the women, who had been injured by a rubber bullet.
Olesya said she spent around 14 hours inside the facility and was released after being forced to sign a paper with what she says were false charges against her. However, her boyfriend is still missing. She is very worried because men appear to be treated much worse than women, according to witness accounts.
“They would put four men in a 1.5 meter (5 foot) wide cell, three were standing but they made the fourth one crawl inside like a dog and stand on his knees,” she Olesya.
Olesya said she keeps coming back to the detention center both to get information about her partner and help others.
“It was very scary to wait outside, we could hear how they were beaten, they wailed, they screamed,” she said. “They stormed out of there with crazy eyes and half-conscious … they just ran in whatever direction the guards told them to and also told them not to approach us, who could help them get home, threatening they would put them back into prison.”
At the Okrestina detention center in Minsk hundreds have been gathering the past two days trying to locate their relatives and friends who were detained during the protests. Some were missing for days, according to people interviewed by CNN, as the authorities often do not disclose the location of detainees and forbid passing food, water or medication. As of Thursday, around 6,700 people have been detained across the country, according to the Interior Ministry.
Ivan, who also did not wish to disclose his last name, told CNN that while he was searching for a friend at the detention center early Thursday, he witnessed a young man with broken arm and leg leave the building.
“People are being beaten up, tortured from the moment when they are detained in the streets,” Ivan said. “Then they are taken to local police station, beaten there and then they bring them here after a day or two, and the beatings and torture continue.”
Several other people have shared similar accounts of mistreatment while in government custody. Reports and pictures showing injuries sustained by the detainees have also appeared on social media. The Belarusian Association of Journalists said in a statement it recorded dozens of cases of violence against journalists, while several remain in detention.
The Russian independent news outlet Znak.com published an account by one of its journalists, Nikita Telizhenko, who reported in Minsk and said he had spent 16 hours detained with multiple protesters grabbed from the streets who were forced to lie face down in pools of blood, with some men stacked on top of another.
“The most brutal beatings were happening all around: hits, screams, cries and shrieks coming from everywhere,” Telizhenko said. “I felt that some of the detained had broken bones — hands, legs, spines — because with the tiniest bit of movement they wailed in pain.”
Telizhenko says he was eventually released after an intervention from the Russian Embassy, which helped release and repatriate several journalists back to Russia.

A change in tactics

Despite facing such brutal crackdowns, the opposition has shown no sign of backing down. But it has changed strategy and tactics.
Thousands of mainly female peaceful demonstrators clutching white flowers and balloons lined the streets of Minsk Thursday as part of a more decentralized protest. Across the country, women are forming so-called “solidarity chains” to demand an end to the violence and that those detained be released. White ribbons, bracelets and shirts have become symbols of the movement, a color that initially representing the peacefulness of protesters and later morphed to reflect the old Belarusian flag — white with a red stripe — which can be seen hanging from many windows in the city.
One chain of protesters in Minsk was almost two miles (3.2 kilometers) long. Cars passing by often honked to show their support.
During an interview with CNN on Wednesday, Maria Kolesnikova — the last of the three women who became the faces of the country’s opposition still in the country — wore a white suit as she said she believed that the clashes over the disputed elections results signal the decline of Lukashenko’s presidency.
The trio — Kolesnikova, Svetlana Tikhanovskay and Veronika Tsepkalo — joined forces to take on Lukashenko in the election after several opposition candidates were either barred from running or jailed. Lukashenko dismissed the trio as “poor girls” in his annual state of the union address last week, and said he would not “give the country away.”
But the women appeared to enjoy significant support. Tikhanovskaya’s campaign rallies saw significant turnouts even in small Belarusian towns not known for their protest activity. About 63,000 people attended the largest event in Minsk in July — making it the biggest demonstration in the past decade.
The independent monitoring group “Honest People” said that according to its data, Tikhanovskay — who was standing in for her jailed husband — had won in at least 80 polling stations across Belarus in Sunday’s vote, prompting many to demand a recount.
Tikhanovskay and Tsepkalo say they were forced out of Belarus after the election because of threats from the government. Tikhanovskaya’s campaign told CNN on Sunday that nine people associated with the campaign had been arrested, and her decision to leave was made in part to free her peers.

‘I’m not a bloodthirsty person’

Lukashenko claimed earlier this week the protests were initiated by “foreign puppeteers” adding that the law enforcement will not back down and maintained he still enjoys widespread support.
However, the allegations of torture appear to have fueled public anger toward the government.
On Thursday, thousands gathered in Zhodzina, a town around 50 kilometers (31 miles) outside of Minsk, where one of the main detentions is located. Videos from the event showed people chant “Release!” and “Leave!” — a chant evidently directed at Lukashenko.
Some of the country’s military and police officers also appear to be turning against Lukashenko and showing support for the opposition. A video posted on Instagram by a man named Evgeny Novitski shows his brother — a former special forces officer — throwing his uniform into a trash can, saying he is not proud of his job anymore.
“Hi all! I gave an oath to my people, and looking at what’s happening in Minsk right now, I can’t be proud of where I’ve been serving, and so, I can no longer keep this uniform at home,” the former officer says.
Another video posted by Belarusian TV station Nexta, shows a police officer named Ivan Kolos saying he refuses to follow “criminal orders.” He urged his colleagues to not point guns at peaceful people and be with them instead. He said he would take orders from Tikhanovskaya, not from Lukashenko.
The growing outcry has some prompted Belarusian authorities apologize late Thursday, a reversal from their previous rhetoric promising a severe response to protesters.
“I want to take full responsibility and apologize in a humane way to these people … I’m not a bloodthirsty person and I don’t want any violence,” Belarusian Interior Minister Yuri Karaev said in an interview with a state TV channel ONT.
Karaev also addressed the use of force against journalists by saying he is “against any violence against journalists, but this does not mean that you need to climb between the two sides, do not go into the thick of it!”
Lukashenko’s longtime ally and speaker of the Belarus senate Natalya Kochanova also came out with a televised statement on the President’s behalf urging Belarusians to “stop” and “cease self-destruction.”
“Less than a week ago, presidential elections were held in the Republic of Belarus. The people made their choice. But everything that happened next is an unprecedented attempt to destroy what we have always been proud of — our peaceful life,” Kochanova said.
“We all don’t need a fight, we don’t need a war. Minsk has always been quiet and calm,” Kochanova said. “The President heard the opinion of labor collectives and instructed to investigate all the facts of detentions that have occurred in recent days. Intensive work in underway today already more than a thousand people have been released under the obligation not to participate in unauthorized events.”