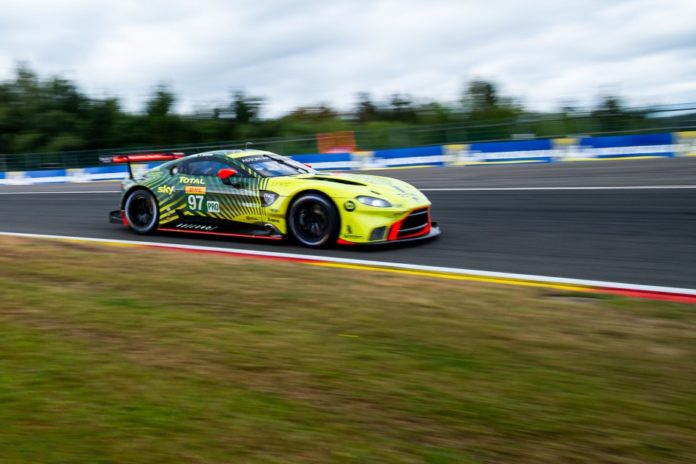 The second 90-minute Free Practice session saw the times set yesterday reduced with the no1 Rebellion Racing R13-Gibson once again quickest around the 7km Spa-Francorchamps circuit, while Aston Martin set the LMGTE pace with a 1-2 at the chequered flag.

The LMP2 class cars continue to run closely with their LMP1 big brothers, with the no36 Signatech Alpine ELF A470-Gibson of Thomas laurent finishing the session in 4th overall behind the no7 Toyota on a 2m03.371 and ahead of the LMP1 class no4 Bykolles Racing Team Enso CLM.  Second quickest in LMP2 was the no29 Racing Team Nederland Oreca of Job Van Uitert, who posted a 2m03.978, with Paul Di Resta in no22 United Autosports Oreca third in class with a 2m04.533.

The two Aston Martin Racing Vantages were 1st and 2nd fastest in the LMGTE Pro category with Belgium’s Maxime Martin leading the way on his home track with a 2m14.678, just over half a second ahead of Nicki Thiim in the no95 Vantage.  The no71 AF Corse Ferrari of Miguel Molina was third quickest with a 2m16.044, just 0.021s ahead of Kevin Estre in the no92 Porsche 911 RSR-19.

Reigning FIA WEC LMGTE Am champions Team Project 1 were the quickest of the ten LMGTE Am entries with Matteo Cairoli setting a 2m16.991 lap, 0.419s ahead of the no54 AF Corse Ferrari and a further eight thousandths ahead of their teammates in the no57 Team Project 1.

The third and final Free Practice session of the Total 6 Hours of Spa-Francorchamps will take place this afternoon at 14h00 and will last 60 minutes.