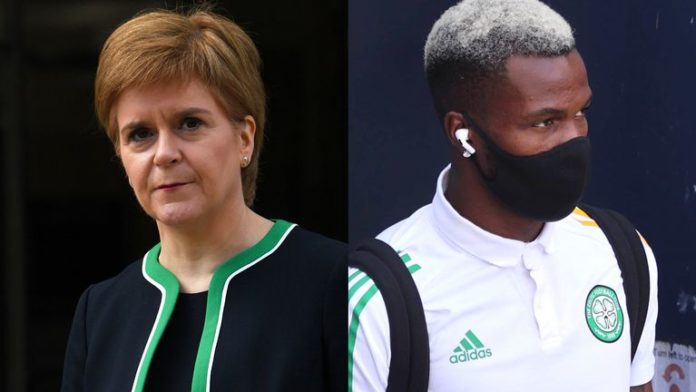 Hearts are seeking an explanation from the SPFL and SFA for why they have been asked to pause training as part of coronavirus protocols.

The Joint Response Group are looking to strengthen existing rules following demands by the Scottish Government to instigate penalties for breaches of health and safety guidelines.

First Minister Nicola Sturgeon handed Scottish football a “yellow card” on Tuesday after it emerged Celtic left-back Boli Bolingoli had travelled to Spain and failed to quarantine days before playing against Kilmarnock.

That came after two Aberdeen players caught Covid-19 and a further six were instructed to self-isolate following a night out.

Part of new measures to be implemented include clubs outside the Scottish Premiership being told they cannot yet return to training until August 24 – but relegated Hearts have already done so.

Robbie Neilson’s side have been back in training since Monday August 3 with training held within a bio-secure bubble at the Oriam and all squad members and staff subjected to twice weekly testing in a similar manner to Scottish Premiership clubs.

Neilson is believed to be furious with the decision which was conveyed with just over an hour’s notice before it was made public by the SFA/SPFL Joint Response Group.

Hearts have released a statement claiming they are being treated ‘disproportionately’ and say they were originally granted permission to return to training on August 3 in order to not only prepare for the new Championship season but also the Betfred Cup and a Scottish Cup semi-final.

It continued by reinforcing the ‘unnecessary’ financial costs involved in the permitted return now being aborted – including taking players and staff off furlough and signing contracts with service providers as well as extensive testing.

The statement added: “We should not forget that this situation has come about, not because of Covid-19, but because of behavioural issues, not by our employees but by those of other clubs.

“This delay reflects a lack of confidence that certain clubs will be able to comply and meet the required protocols. How can it possibly be “fair” that we should be penalised?”

The statement finished by saying that ‘everyone at the club is equally incensed’ with Hearts currently considering their options.

The club are further incensed as the Joint Response Group have allowed the SWPL champions Glasgow City FC to continue training as they prepare for the Champions’ League quarter-final.

Meanwhile, the National Clinical Director, Dr Jason Leitch, has said the decision to pause training was not taken by the Scottish Government but instead by the SPFL/SFA JRG.

A JRG spokesperson said: “The pause on all football training beneath Premiership and including all adult football over-18 was part of the agreement with Scottish Government that culminated in today’s range of measures being announced and the majority of this week’s games going ahead as scheduled.”