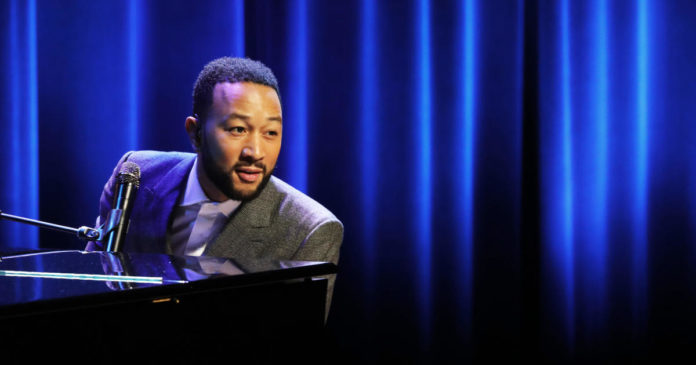 Some of entertainment’s biggest names are set to appear at next week’s Democratic National Convention. John Legend, Billie Eilish, Jennifer Hudson, Common, Billy Porter, The Chicks, and more will perform during the four-day event that will make the Joe Biden-Kamala Harris ticket official.

The entertainment heavyweights will be joining some of the party’s biggest names. Michelle Obama is set to speak Monday night, Bill Clinton will be giving an address Tuesday night and Barack Obama and Hillary Clinton will speak Wednesday night.

“In just three days, we will kick off a Democratic Convention that will look and feel very different than past conventions. It will truly be a convention across America, and these incredible artists will help us tell the story of where we are as a country today under Donald Trump’s failed leadership, and the promise of what we can and should be with Joe Biden as president,” Stephanie Cutter, 2020 Democratic National Convention program executive, said in a statement. “These artists are committed to engaging with, registering and mobilizing voters to get us over the finish line in November.”

Other performers will include Leon Bridges, Prince Royce, Maggie Rogers and Stephen Stills.

According to the convention planners, the performances will range from renditions of the national anthem and American classics to new songs with the idea of drawing in viewers who may not have tuned in before.

The Democrats have been preparing for a largely virtual event since they announced plans in June for a scaled-back, in-person convention. Earlier this month, the Democratic National Convention Committee said Biden and other speakers would not be traveling to Milwaukee to deliver their speeches. CBS News has confirmed that both Biden and Harris will deliver speeches from Delaware.

In addition to the top acts, Monday night will feature a performance of “The Star-Spangled Banner” from youth choir members across America. DNCC partner Commonwealth Youthchoirs has assembled a 57-member choir of young people from all walks of life, and each member will represent one of the 57 states and territories as they perform from remote locations across the nation.

Legend has been a vocal critic of President Trump but had endorsed Elizabeth Warren and even stumped for her during the primary season. In June, he was among a group of celebrity hosts for a Biden virtual fundraiser. On Tuesday, after Biden announced Kamala Harris as his running-mate Legend tweeted, “Very happy for our friend and Senator and future Vice-President, @KamalaHarris, and very much looking forward to voting for the Biden-Harris ticket to begin the difficult work of recovering from this nightmare presidency and building an even better future.”

This will not be Legend’s first performance at the DNC. He performed during the 2008 convention that nominated Barack Obama. Jennifer Hudson also appeared at the convention that year to sing the national anthem. Hudson was also among the hosts of the Biden fundraiser in June.

Billie Eilish, who is old enough to vote for the first time in 2020, has also slammed the president. Heading into the election, the Grammy award-winning artist has teamed up with the non-profit organization HeadCount to help educate her millions of fans on how to register to vote and participate in the election.