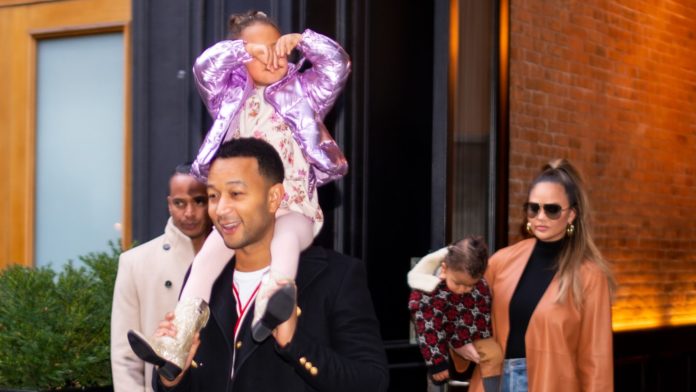 Chrissy Teigen and John Legend have announced that they are expecting their third child together.

The model and the singer first hinted at the happy news in Legend’s latest music video, which featured Teigen and their two children Luna, 4, and Miles, 2.

Shot in Mexico, the video features Teigen, 34, and Legend, 41, cradling her baby bump on a beautiful beach, while their children play.

Video-hosting service Vevo teased the premiere on Twitter, hinting that there was more to the new release than first met the eye.

They wrote: “John Legend and Chrissy Teigen drive us ‘Wild’ in the heartfelt visuals for John’s latest song with Gary Lee Clark Jr! Be sure to watch it now for a beautiful surprise!”

It was directed by Nabil Elderkin, who first introduced Legend to Teigen 14 years ago on the set of his video for Stereo. They tied the knot seven years later in Italy.

Teigen later confirmed she is expecting on Instagram – in her own very blunt way – showing off her growing bump and writing: “Look at this third baby s***. What? Oh my god.”

Known for her honest social media posts, Teigen has previously shared photos of her breastfeeding her daughter Luna, in a bid to destigmatise and normalise natural nursing.

She also shared a photo of her son, Miles, when he was six-months old wearing a helmet to correct flat-head syndrome, promoting awareness of the common condition.

According to the American Academy of Paediatrics (AAP) head-shaping helmets help to fix plagiocephaly, a condition that occurs from a baby’s sleep position and results in a misshapen or flat head. However, here in the UK, the NHS does not recommend helmets due to lack of evidence that they work.

Teigen has spoken openly about her past battles with post-natal depression.

The couple haven’t revealed the baby’s due date, but it seems likely they will be welcoming the new addition to their family in early 2021.