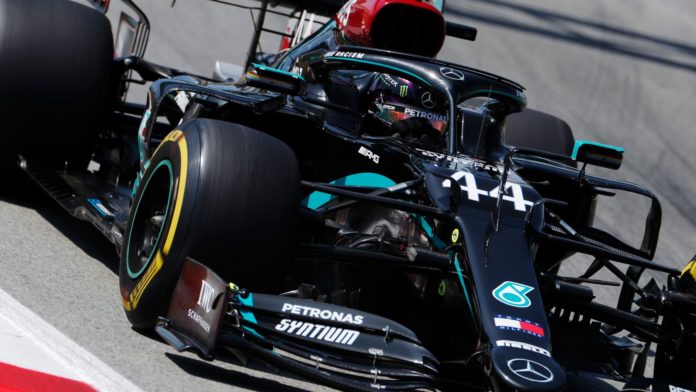 Lewis Hamilton hit form to top the timesheets ahead of team-mate Valtteri Bottas in second practice for the Spanish GP.

But behind the Mercedes there was a surprise pecking order as while Max Verstappen was, as expected, the closest rival, Renault’s Daniel Ricciardo and Romain Grosjean in the Haas completed an unlikely top five.

Hamilton, the championship leader, has won the last three races in Barcelona and after being out-paced in the Friday morning session, moved back ahead of Bottas in the battle of the Silver Arrows in P2.

His advantage was almost three tenths on the soft-tyre qualifying simulations, giving Bottas plenty to ponder.

Mercedes have been superb and often unchallenged over one lap in F1 2020, and Verstappen was 0.8s off the pace in third to conclude Spain’s opening day of track action.

It appears that race pace in hot conditions will once again be Verstappen’s only shot at beating Mercedes, though he was faster than anyone through the opening sector on his flying lap before hitting issues.

Alex Albon was only 13th in the other Red Bull, over half a second slower than his team-mate.

Instead it was Ricciardo who was the only other driver within a second of the Silver Arrows, with Grosjean continuing his impressive day for Haas by finishing fifth and ahead of Charles Leclerc in the Ferrari.

Sebastian Vettel, armed with a new Scuderia chassis, was down in 12th.