Home World Hong Kong media tycoon says ‘the fight has to go on’ after... 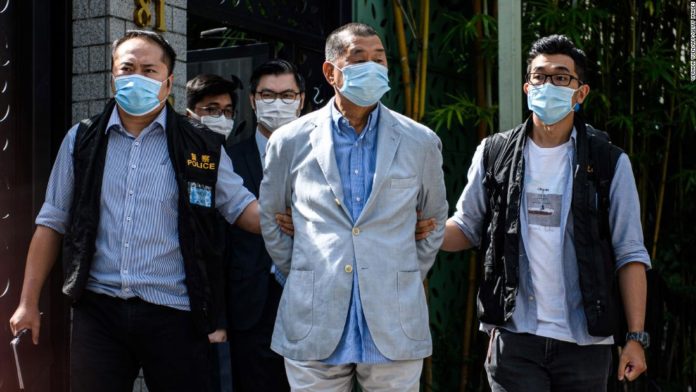 Lai was arrested Monday on suspicion of colluding with foreign forces to endanger national security, conspiracy to defraud and intention to incite succession. That morning, 200 officers raided his pro-democracy newspaper Apple Daily and seized scores of boxes of documents.
“There is always a price to pay. I have been fighting [for democracy] throughout the years,” he said, adding that he would continue to do so because “without freedom you have nothing left.”
Lai is revered as a standard-bearer of the Hong Kong democracy movement by many. But others have long accused him of being an agent for the United States, due to his strong ties to Washington.
Despite that criticism, Lai said he believed he would get a fair trial, as the Communist Party of China (CCP) seeks to reassure the international business community that Hong Kong’s cherished rule of law will be upheld. He called his case a litmus test for the law.
Speaking to CNN at his home in Kowloon on Friday, the septuagenarian dismissed the charges against him as “not very serious,” adding that the evidence presented by officers during his 40 hours in custody included television interviews with international media, in which he called for China to be sanctioned.
Under the national security law this could be interpreted as collusion with a foreign force.
Lai has lobbied for the United States to take a harder line on China, but said he has not done this in person since the law passed on July 1, only on television. He also said he does not back the Hong Kong independence movement, although he supported people’s freedom to call for it, and denied long-standing rumors that he used money from the United States to subvert China.
The offense of colluding with foreign powers carries a maximum penalty of life imprisonment. Lai said that while he hoped he would not spend the rest of his life in jail, he accepted that jail time was a possibility.
When the national security law was passed, Hong Kong leader Carrie Lam said it would only target “an extremely small minority of offenders while the life and property as well as various legitimate basic rights and freedoms enjoyed by the overwhelming majority of citizens will be protected.”
At least two dozen people have been arrested on a variety of charges including suspicion of violating the national security law, including one of Lai’s sons. What they have done to contravene the law since it took effect in July is unclear.
A spokesperson for China’s Hong Kong and Macao Affairs Office, which is run by the country’s State Council, on Monday said it “firmly supports” the arrests of Jimmy Lai and others who were apprehended. “People who colluded with foreign forces to endanger national security should be sternly punished under the law,” the representative said in a statement.
“Hong Kong will not have stability if this danger is not removed.”

Lai was born in mainland China and came to Hong Kong as a 12-year-old. He founded Apple Daily in 1995, two years before the former British territory was handed back to China, to oppose Beijing and promote democratic values. That has long made him a thorn in the side of the government.
When police officers came to his multimillion-dollar home Monday morning, Lai said he was relieved to see they were Hong Kong policemen. The national security law allows for certain cases to be tried over the border in mainland China, though those circumstances are not clearly defined.
Police took letters from his home and his wife’s computer, Lai said, adding that he does not use a computer, only a cell phone. After being detained, he was escorted to the Apple Daily newsroom and his yacht to assist with searches. He says he remained silent during his videotaped interview.
According to Apple Daily, Lai was released on bail equating to roughly $64,500.
While sleeping on the floor of a holding cell, the multi-millionaire who made his first fortune with fast-fashion giant Giordano, and who Forbes reported in 2008 was worth $1.2 billion, said he questioned whether or not he would have taken the same path if he had known it would result in jail.
“I thought, Yes maybe I will. Because this is my character. Character is destiny,” he said.

A role in the protests

The Apple Daily took an active role not just in reporting last summer’s pro-democracy protests, but in supporting them. The tabloid ran front pages calling for citizens to go out and march and gave away posters to raise at demonstrations.
As those protests became increasingly violent, with the storming of the city’s legislative headquarters, the siege of a university and the closure of the city’s airport, calls for Hong Kong independence from mainland China grew.
But Lai is adamant that he has never associated with the independence movement in Hong Kong, or called for violent means to achieve democracy.
“I want people to have the right to keep the rule of law and freedom of speech we have,” he said. “Violence is a game we had no right to play. We can never be more violent than the CCP who have guns and tanks.”
Lai’s closeness to right-wing politicians in the United States — he met with Vice President Mike Pence, Secretary of State Mike Pompeo and then National Security Adviser John Bolton in July last year — has been used by Chinese state media to paint the protest movement, along with Apple Daily and similar media, as US-controled.
The People’s Daily — the official mouthpiece of the Chinese Communist Party — claimed last year that Lai was part of a quartet of “secretive middlemen and modern traitors,” as Beijing tried to blame the unrest in Hong Kong on foreign forces.
Some reports have suggested that Lai is at least, in part, bankrolled by the United States and that he has supported protesters in Hong Kong using money acquired by his Western political connections. Lai denied such allegations, saying: “I never [used] funded money to subvert the country.”
“Maybe that’s a charge they have against me,” he said. “But there’s no evidence I support the Hong Kong independence movement because I oppose this.”
When the Hong Kong government tried to introduce a law last year that would permit extradition to China for certain crimes, millions of people took to the streets to protest. But since the national security law came into effect, there have been no mass marches against the wide-ranging legislation.
“I think the resistance movement should go on,” Lai said. “[But] it has to go on in a very different way. We can’t have two million people on the street anymore. We will have to be more flexible, more careful and more innovative, or even atomize the whole movement. But I think a lot of people will continue to resist.
“This is a time that is not just a movement — it’s a fight for the rule of law, for freedom,” he added. “It’s a time to get ready for sacrifice.”
Lai has a British passport. Before he was placed under a travel ban, he could have left Hong Kong rather than remain to face charges. But he said he will not abandon the city which he fled to from China decades ago, and fell in love with for its freedoms — and which allowed him to prosper as a businessman, media tycoon, and democracy activist.
“I cannot leave. I cannot back off,” he said. “Because the business has to go on and the fight has to go on.”