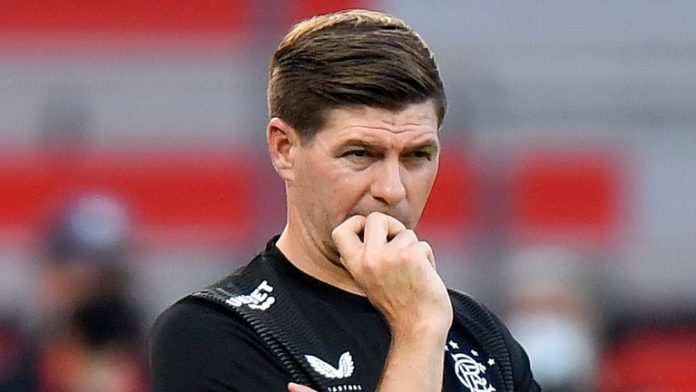 Watch Livingston vs Rangers on Sunday, live on Sky Sports Football from 3:30pm; kick-off at 4:30pm

Rangers manager Steven Gerrard says he is excited about the attacking talent at his disposal and “welcomes the headaches” of trying to keep all his strikers happy.

Gerrard added Kemar Roofe and Cedric Itten to his squad last week as Jermain Defoe picked up an injury in training and speculation continued to circulate about Alfredo Morelos’ future.

The Colombian had agreed personal terms with Lille ahead of a potential move but there has been no agreement over a fee between the clubs, with Morelos scoring two goals in three starts since the resumption of the Premiership.

Gerrard made no secret of his desire to add to his squad after a pre-season friendly win over Coventry last month and is now delighted with what he has going forward between Morelos returning to form and the acquisitions of Roofe from Anderlecht and Itten from Swiss side St Gallen.

Asked how excited he was about the potential combinations at his disposal when all his forwards are fit, Gerrard told Sky Sports: “Very – listen, a couple of weeks ago I felt really vulnerable because Jermain Defoe got injured.

“I was told he was going to be missing for three weeks and he has had another setback recently so he is still a little bit away.

“Alfredo – there is obviously a lot of noise in the background around that and at that time you feel vulnerable in case you get another injury in that area so it is nice to be in this position to have different options available.

“Obviously the talent available excites me as well.”

Gerrard admits his new signings will take a little bit of time to get up to speed but is in no doubt that he can keep all his forwards happy in terms of game-time.

“That’s part and parcel of the job – I certainly welcome those headaches,” Gerrard said.

“They are all at different stages. Buff [Morelos] is ready, he’s scored a couple of goals and had a strong pre-season. Cedric has come from a different club, he is a young lad, it is a big move for him so he’ll need a little settling in period to get up to speed but he is certainly ready physically.

“Kemar is still finishing off a pre-season so we are still trying to get training minutes and training load into his body to get him 100 per cent match fit because he is still a little bit short and shy in terms of where the other players are at.”

Gerrard has confirmed that injured Leon Balogun will miss Rangers’ Premiership match at Livingston on Sunday, live on Sky Sports.

The 32-year-old defender, signed last month on a free transfer from Brighton, did not appear for the second half of the 3-0 victory over St Johnstone on Wednesday night and was replaced by Filip Helander.

Gerrard said: “He won’t be available for the weekend, he’s got a small quad problem. We’re still waiting for some scan results to confirm that but he is certainly ruled out for the weekend.”

The Rangers boss is aware that Lyndon Dykes will likely be leading the line for the Lions but said: “We’ll pick the two best centre-backs we believe are capable of getting the right result. We won’t really focus on any individual players that we’re going to be coming up against.

“Filip came on and did extremely well and George (Edmundson) has had a real strong pre-season so I’ll give it as late as I need to and then make a decision who partners Connor (Goldson) because I think Connor is in excellent form. He deserves to keep his place, and I’ll make a late decision on Filip and George in the coming days.”

Gerrard said he welcomes the battle he expects to get at Livingston on Sunday as they look to continue their flawless start to the Premiership season after three wins out of three and no goals conceded.

He said: “First and foremost we welcome the battle. Different teams bring different styles throughout the course of the season, but we certainly welcome physical challenges and we need to be ready for that. And we certainly don’t have a problem with it obviously as long as it’s in in a fair way.

“Of course we know it’s going to be a battle, and it’s a battle that we’re going to have to stand up to.

“I think what’s important in these games is that we deal with direct play at times and we win our first duels, we win our second duels and we are in the right places to try and control a game because there will be moments where the ball is not necessarily in our style, if you like. But we have to be capable of adapting within the game to play in different ways to get the right results.

“They are a good team, an organised team and they try and take you out your comfort zone. But we are in good form, we’re in a good place. And it’s down to us to go there fully prepared to win a war and win a battle before our quality can show.”

Gerrard has also revealed that Ross McCrorie has expressed his desire to leave Rangers with the Ibrox club having rejected one bid from Hibernian, while Greg Docherty remains in talks with Hull.

He said: “Greg’s got permission to speak to Hull and I’m told talks are ongoing. Greg is in this morning so the plan is to catch up with him after this morning session. I think it’ll boil down to Greg’s decision.

“In terms of Ross, we knocked something back from Hibs and I believe they have come again. So that’s moved a little bit closer. The plan again is to catch up with Ross this morning. He’s told me clearly that he wants to move on. But at the same time the ball is in Hibs’ court, to match what we want.”