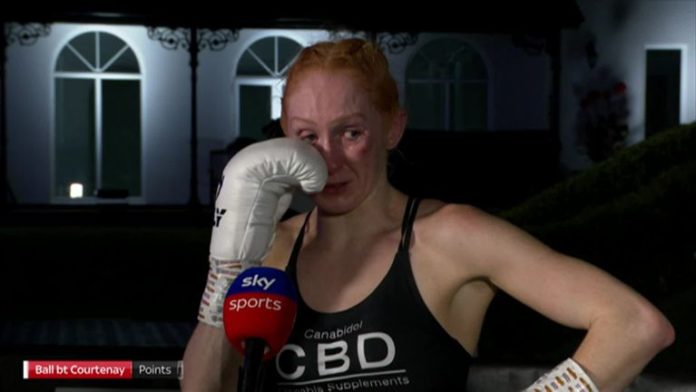 Shannon Courtenay’s unbeaten record was shattered as she was floored and defeated on points by Rachel Ball at ‘Fight Camp’.

The 27-year-old ‘Baby Face Assassin’ hit the canvas heavily in the opening round and Courtenay’s spirited response was not enough, with Ball digging deep to claim victory with a 77-75 margin.

THE CRUCIAL KNOCKDOWN 👇 @Rachel_Ball_ landed this sweet left hook in round 1 to give herself an early lead 👌 pic.twitter.com/ErAoIePf9x

Courtenay marched forward after landing an early right hand, walking into a counter left hook from Ball that sent her toppling backwards to the canvas.

But the Watford boxer weaved more cautiously into range in the second, ducking low to deliver crisp right hands.

Edging forward, Courtenay uncorked hooks at close quarters in the third, while a right hand knocked Ball off balance in the fourth.

Ball gave a reminder of her threat, landing a stiff right hand during a fierce exchange in the fifth, but Courtenay hammered in hooks to head and body in the sixth.

With the frenetic pace taking its toll, Ball edged the seventh with a stiff jab, and Courtenay was unable to close the gap on the scorecard as she wearily traded in the final round.