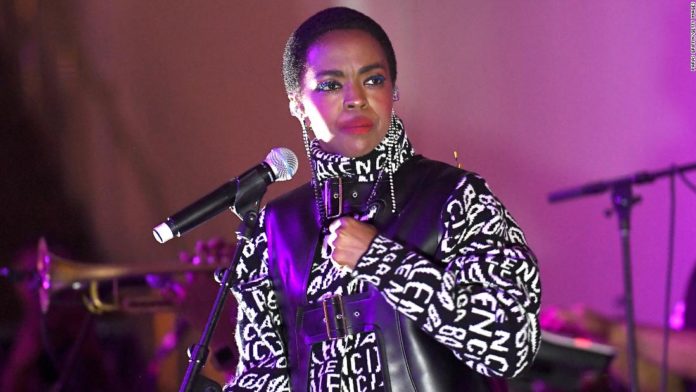 Marley, 21, is a model and artist and the daughter of Hill and her former romantic partner, Rohan Marley.
She is also the granddaughter of the legendary singer Bob Marley.
In a now deleted two-hour long Instagram Live posted on Monday, Selah Marley talked about her relationship with her parents and said she had long-term effects from her interactions with them, including Hill and her father disciplining her as a child.
“It’s crazy. I’m playing this trauma back in my head as I speak to you,” Marley said. “She’d be like, ‘Go get the belt.’ That’s how you know you’re in trouble. It’s like walking to your death.”
“My mom is an amazing woman, but she obviously didn’t do everything right,” Marley said, adding that Hill’s physical punishment of her was “some slavery s**t,” she says in her video now posted on YouTube.
On Thursday Hill posted a lengthy note on her verified Facebook page.
“Uhhhh black people, what???,” Hill wrote. “Selah has every right to express herself, I encourage it, but she also got the discipline that black children get because we are held to a different standard.”
The spanking of Black children has been hotly debated between those who view it as abuse and those who say it is a necessary discipline to protect them from the violence of the world.
The singer said, “The discipline was seen through the lens of a young child who also had no place to reconcile me as mom, and me as a larger than life public figure,” adding that it took Hill awhile to realize her children and others “saw me in this duality.”
“If I am guilty of anything it is disciplining in anger, not in disciplining,” Hill wrote. “The toxic venom I ingested for standing on principle, and confronting systemic racism far BEFORE it was the thing to say or do (everything you NOW celebrate everyone for!) — the people who called me CRAZY and have yet to apologize and say ‘oh yeah, we were wrong’, OF COURSE that seeped into my home, it was intended to. An entire operation trying to break an artist with a voice and knowledge of herself — way ahead of her time — was in motion. I was affected, my family was affected, my children were affected.”
Hill, who began her career as an actress on the soap opera “As the World Turns” and in the film “Sister Act 2: Back in the Habit,” is a former member of the award-winning rap group The Fugees.
She took home five solo Grammy Awards at the ceremony held in February 1999, making her the first woman to win five or more awards in a single night. Her “The Miseducation Of Lauryn Hill” won Album of the Year that night and is credited as the first hip hop album to ever do so.
Hill, who is the mother of six children, five of them fathered by Rohan Marley, said she speaks often with her eldest daughter and that they are both working through their own issues.
“We all hate abuse and exploitation, sometimes in an effort to fight against it we can easily become the abuser, the exploiter, and THIS is what we have to watch for,” she wrote. “No one is exempt from needing to watch themselves in this way.”
For her part, Marley is now criticizing reports and reaction to her post.
She posted a note on Tuesday and a new video on Wednesday on her verified Instagram account to clarify her earlier video.
Marley said the situation is “complex” and asked people to not bash her parents.
“Why do you all take the worst part of my video,”? she asks in her video. “Like, really, really, really, can I ask you all a question, did you guys actually understand that I was coming from a place of healing?”
Rohan Marley responded to his daughter’s clarification video from his verified Instagram account, writing in the comments “I LOVE YOU MY LIONESS.”
“The truth might be an offense but it’s not a sin ..I LOVE YOU I totally understand what you mean ..ABBA.”
In her note published on her Instagram stories Tuesday, Selah Marley defended her relationship with her parents.
“I never said that I did not love them,” she wrote in her note. “I said their shortcomings created trauma that I now need to consciously and actively heal from.”
CNN has reached out to reps for Hill as well as Selah and Rohan Marley for additional comment.