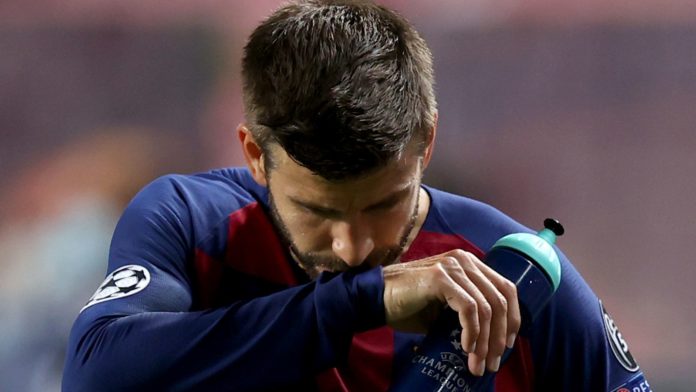 Barcelona were beaten 8-2 by Bayern Munich in the Champions League quarter-finals, one of the worst defeats in their history

Barcelona produced an abysmal performance in Lisbon as they were humiliated by the Bundesliga champions, conceding eight goals in a match for the first time since an 8-0 defeat to Sevilla in April 1946.

Pique – one of the surviving members of the team who won the Champions League in 2009 under Pep Guardiola to begin a golden era for Barcelona – gave a damning verdict of the result and offered to leave the club in order for it to progress.

“We feel devastated, although shame is the real word I’m looking for. We cannot afford to compete like this because it’s not the first, the second or the third time that something like this has happened,” he told reporters in quotes carried by Reuters.

“This is very painful but I hope it serves some purpose… We all need to reflect deeply, the club needs lots of changes, I’m not talking about the coach, players – I don’t want to point the finger at anyone but the club needs changes on a structural level.

“If new blood needs to come for the club to change course then I’m not untouchable and I’ll be the first to leave if needs be, because it seems as if we’ve hit rock bottom.

“We all have to reflect about what is the best thing for the club and for Barca.”

Setien: Too early to think about future

There was already pressure on Barcelona coach Quique Setien heading into Friday’s game, and that will have increased exponentially following the devastating result.

However, he would not be drawn on his future in the immediate aftermath and believes that time will be need to take stock of Friday’s events.

He said: “It’s really painful and a huge frustration. Barcelona is such a big club. This does damage and something will change for sure.

“It’s too early to think if I’ll continue or not. That doesn’t depend on me, there will be reflection given the importance for Barcelona of such a humiliating defeat.”

Despite the historic result, Bayern Munich boss Hansi Flick was in a pragmatic mood following the game, preferring to focus on the upcoming semi-final where they will face either Manchester City or Lyon.

“Yes, we played an outstanding game and we can be happy but we all know we still have hard work to do if we are to stand in the end where we want to stand,” he said in quotes carried by Reuters.

“It is a win and we wanted to reach semi-finals. OK, it is impressive, we set a small marker but the experienced players know that the next game awaits and we will need the same performance. Let it sink in, analyse and then prepare for the semi-final.

“We know how quickly it [from winning to losing] can happen in football. We must recharge from tomorrow for the semi-finals.”

Analysis: End of an era at Barcelona

Friday’s capitulation was the clearest sign yet that it is the end of an era at Barcelona. The Pep Guardiola revolution, the brilliance of Lionel Messi and all of those trophies seemed like a distant memory by half-time. Barcelona got a taste of some of the thrashings they have dished out over the years.

It has been an unhappy season at the Nou Camp for many reasons. Despite a positive start, they began to unravel in December and January, including a run of only one win in five matches.

Ernesto Valverde was replaced by Setien but things did not improve too much – they were knocked out of the Copa del Rey, finished five points behind Real Madrid in La Liga with a four-month football suspension in between and have suffered one of the biggest defeats in the club’s history.

2005-06 – 2019-20 will be the first Champions League season since 2005-06 in which neither Lionel Messi or Cristiano Ronaldo will make an appearance in the semi-finals or beyond. Era. #UCL pic.twitter.com/896i7yPngG

The average age of Friday night’s starting XI was 29 years and 329 days, the oldest team they have ever named in the Champions League – and it showed.

There were bright spots in the opening 20 minutes which indicated a competitive game, but once Bayern went 2-1 ahead, Barcelona lost all their confidence and fight, ability to defend well, keep and pass the ball effectively or even just to communicate.

This year’s semi-finals will also be the first time since the 2004/05 season that neither Messi nor Cristiano Ronaldo will feature. While they remain two of the best players in history, the end of their domination has coincided with Barcelona’s.

Not since 1946 have Barcelona conceded eight goals in a game and it is the first time since April 1951 they lost by a six-goal margin. The horrible records go on and there is one thing for sure – the club need one mighty overhaul which will take much longer than a summer transfer window and new blood throughout the club. Their legacy depends on it.