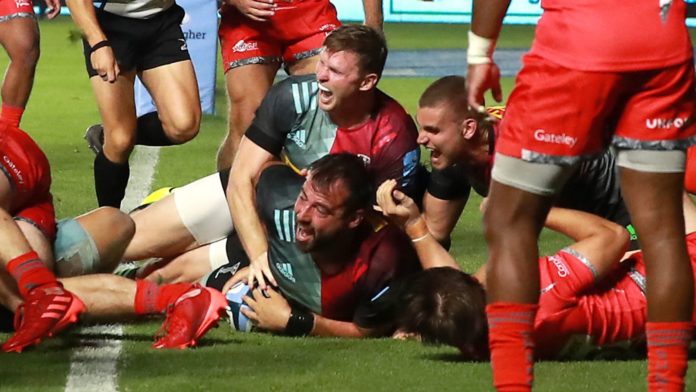 Harlequins celebrated the return of the Gallagher Premiership by stunning title-chasing Sale in a penalty-strewn 16-10 victory behind closed doors at The Stoop.

After five months of inactivity caused by Covid-19, English rugby’s top flight came out of hibernation with an upset inflicted in defiance of the expectation that the Sharks were ready to ignite their pursuit of league leaders Exeter.

Debutant Manu Tuilagi was paraded as part of a powerful starting XV populated with high-quality South Africans, but they rarely got out of first gear as the Premiership resumed in predictably rusty fashion.

Harlequins, who gave Chris Ashton his first start, were sharper and smarter throughout and piled over for the decisive try through hooker Scott Baldwin in the third quarter.

Fly-half Marcus Smith kicked three penalties and a conversion and Quins were rarely out of control, pierced only by Byron McGuigan’s try as Sale exited half-time with a purpose that then deserted them.

It was a low-quality return to action for the competition, marred by 29 penalties and resembling a pre-season game.

The teams showed their support for the Black Lives Matter movement in different ways, Sale’s players wearing white T-shirts emblazoned with ‘Rugby against racism’ while Quins took a knee as part of a circle.

Four of the Sharks starting line-up also took a knee after the clubs were given free rein to mark the fight against racism in the way they saw fit.

For all the expectations of Sale’s renewed challenge for the Premiership title, it was Quins who made the brighter start and within 20 minutes they had built a lead through two Smith penalties.

They were sharper in all respects, profiting from time on the ball and falling on the right side of referee Luke Pearce’s whistle on a warm night in south-west London.

Time and again Sale’s shoots of recovery came to an abrupt halt, the occasional individual breaking a tackle failing to make amends for their disjointed play and leaden-footed toil.

Joe Marchant raced downfield and was supported by Mike Brown as Quins staged a quick-witted attack before wing Nathan Earle grabbed a loose kick to weave a path into space.

Smith’s third penalty extended the lead, while Sale fly-half Robert du Preez could only pull a simple chance wide of the right post.

England prop Joe Marler was reprimanded by Pearce for his trademark sledging, the official warning “enough commentary Joe, it’s winding people up”, and Sale took their revenge early in the second half.

An attacking line-out saw Tuilagi act as a decoy and, with acres of space created on the right, wing McGuigan completed a routine finish.

But the comeback was stopped in its tracks in the 57th minute when an ill-advised crossfield kick by Du Preez, taken close to his own whitewash, was picked off by Brown.

A line-out drive later and Scott Baldwin was over, with Smith adding the conversion.

Replacement AJ MacGinty landed a penalty to give Sale hope, but Quins held out with determination.