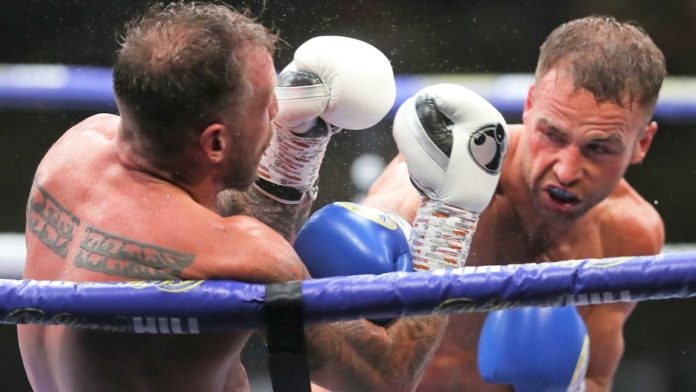 Felix Cash clinically broke Jason Welborn’s resistance in the fifth round to retain his Commonwealth middleweight belt at ‘Fight Camp.’

The unbeaten 27-year-old produced a ferocious response after losing a point for a low blow, flooring Welborn twice before the fight was waved off, and promoter Eddie Hearn hopes to guide him towards a European title.

Stabbing out a swift jab, Cash was eager to display his hand speed, but he was briefly wobbled by a left hook as Welborn gave an early glimpse of his threat.

Cash showed his own power in the second as a right hand forced Welborn into reverse, although the Midlands man replied with a jolting uppercut in the third.

The crisper work came from Cash in the fourth, but he strayed below the belt line in the fifth, receiving a point deduction, before adjusting his aim to club Welborn to the canvas.

Welborn rose to his feet, firing back defiantly, until Canvas dropped him again with a thudding right hand that prompted the towel to be thrown in.

On the same bill, Zelfa Barrett exploded into life following a sluggish start to inflict a one-punch knockout on Eric Donovan.

The Mancunian super-featherweight, who was making his debut for promoter Eddie Hearn, had been troubled by a body shot in the fifth, but then staggered Donovan with a left hook in the sixth.

Barrett dropped Donovan with a sweetly timed left hook in the seventh, and clubbed the Irishman to the canvas again in the closing seconds of the round.

Donovan’s brave resistance was finally ended in the eighth as he toppled backwards following another big left hook from Barrett.

Toward the development of a regional emergency program for the prevention...

Livelihood support rejuvenates the activities of farmers affected by the Ebola...