Home Sport Horsfield one ahead of Pieters 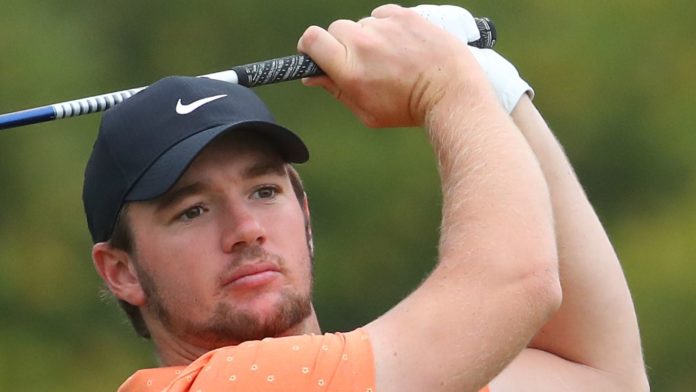 Sam Horsfield holds a one-shot lead at the halfway stage of the Celtic Classic, with Thomas Pieters and Andrew ‘Beef’ Johnston in the chasing pack.

Horsfield, who won his maiden European Tour title at the Hero Open earlier this month, recovered from triple-bogeying his penultimate hole to eagle the last and post a round-of-the-day 64 at the Celtic Manor Resort.

The Englishman sits on 11 under and a shot clear of overnight leader Pieters, who lost a share of the lead after a final-hole bogey, while Johnston heads into the weekend two off the pace alongside Thomas Detry and Callum Shinkwin.

“The 17th was not great but I bounced back after that triple to get myself into a good position for tomorrow,” Horsfield said. “I’ve been in contention, I know what the feelings are like and I’m really looking forward to it.”

Horsfield birdied the first and cancelled out a bogey at the next by picking up shots at the third and fifth, before posting four straight gains from the ninth to move up the leaderboard.

A two-putt birdie at the driveable par-four 15th was followed by a holed bunker shot at the next, only to triple-bogey the next after taking two attempts to get out of thick rough and then three-putting.

Horsfield struck a five-wood to 12 feet at the par-five last and rolled in his eagle, which was enough for the outright advantage when Pieters – out in the afternoon – found water with his approach into the final hole and closed his four-under 67 with a bogey-six.

Shinkwin carded a six-under 65 and Detry posted a blemish-free 66 to get to nine under, with Johnston recovering from a nightmare start to join the group sitting tied-fourth.

The 31-year-old triple-bogeyed the first and bogeyed the fifth, only to birdie four of his next six holes and then follow an eagle at the par-four 15th by birdieing his last three holes to post a back-nine 29.

“If I play good, great, if I don’t so be it,” Johnston said. “I know I’m doing the right things, it’s just a matter of patience that just freed me up and let me play. It’s still not quite right.

“Sometimes you can not play your best and score really well but I don’t want to rest on that, I want to improve on the weekend with my ball-striking.”

Matthew Jordan and Jonathan Caldwell are on eight under alongside Jack McLeod and Sean Crocker, while last week’s English Championship winner Andy Sullivan made the cut on the number after a level-par 70.

Watch the Celtic Classic throughout the weekend live on Sky Sports. Live coverage continues on Saturday from 2.30pm via the red button and 4pm on Sky Sports Golf and Sky Sports Mix.