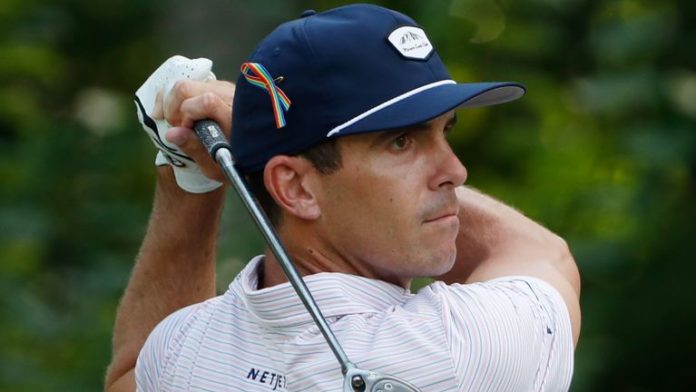 Third round has been brought forward due to threat of bad weather; watch live on Saturday from 2pm on Sky Sports Golf

Billy Horschel is part of a four-way tie for the lead at the halfway stage of the Wyndham Championship, as Brooks Koepka and Justin Rose suffered early exits.

Champion Golfer of the Year Shane Lowry sits a shot off the pace with Doc Redman, Harold Varner III, Harris England and Andrew Landry after a joint-low round-of-the-day 63, with 16 players heading into the weekend within two strokes of the lead.

Lowry recovered from an early bogey to post an eagle and six birdies to jump into a share of fifth, with the Irishman moving from 131st in the FedExCup standings to inside the projected top-125 as he bids to qualify for the season-ending play-offs.

Webb Simpson, the highest-ranked player in the field, is in the logerjam on eight under, while English duo Paul Casey and Tommy Fleetwood are part of the group on seven under that also includes Patrick Reed.

Koepka – playing his sixth week in a row – missed the cut by five strokes after posting a level-par 70, with the four-time major champion indicating he was experiencing pain down his left side during the round.

The world No 7’s hopes ended with a triple-bogey at the tenth after a stray tee-shot and a three-putt from 50 feet, while Rose also failed to make the weekend despite a three-under 67 on Friday.

“This is physical, yeah. I know how to do it, I can do it, I just physically can’t do it,” Koepka said. “My golf swing’s fine. If I can physically do it, then yes, everything’s fine.”

Just seven shots separate the 77 players who made in the cut in North Carolina, with the threat of bad weather seeing the third round played in threesomes and off a two-tee start.

Watch the Wyndham Championship throughout the weekend live on Sky Sports. Live coverage continues on Saturday from the earlier time of 2pm on Sky Sports Golf.