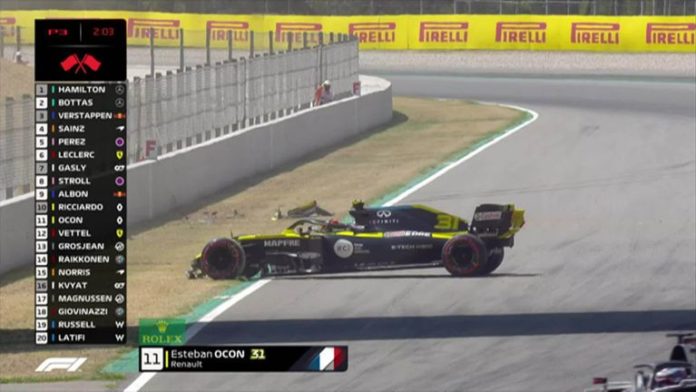 Hamilton a tenth ahead of Bottas with Verstappen 0.5s back for Red Bull; Ocon crashes when trying to avoid Magnussen

Lewis Hamilton ensured he will go into Spanish GP qualifying as the pole favourite by setting the pace ahead of Valtteri Bottas in final practice, which ended with a bizarre crash for Esteban Ocon.

Hamilton, the championship leader, has topped two out of three practice sessions in Barcelona and his advantage over Bottas on Saturday morning was 0.151s, despite a scruffy final sector.

But while it looks set to be another Mercedes battle for pole in qualifying, which starts at 2pm on Sky Sports F1, Max Verstappen will go into the shootout on the back of his most competitive outing of the weekend so far.

Verstappen, in a Red Bull which favours race pace over one-lap speed, was half a second off Hamilton’s benchmark – although was hampered by traffic at the end of his lap, where he usually impresses compared to the Mercs.

There was a big, and rather clumsy, crash at the end of P3 as Ocon smashed into the wall when trying to avoid a decelerating Kevin Magnussen.

Ocon, who like Magnussen was on an out-lap, had let the Dane past him before swerving to avoid the slowing Haas car before Turn Four, smashing into the wall and heavily-damaging his Renault front wing.

The incident is under investigation by FIA stewards. Ocon went to the medical centre for precautionary checks, while his car is being worked on in the garage.

The Frenchman was 11th before that crash, some way off the ‘best of the rest’ battle – which was impressively led by Carlos Sainz in the McLaren.

The home favourite was up in fourth, just three tenths off Verstappen.

Sergio Perez, Charles Leclerc and the in-form Pierre Gasly were the only other drivers within a second of Hamilton out in front, while Alex Albon and Sebastian Vettel once again struggled despite their team-mate’s good pace.

Albon was only ninth in the Red Bull while Vettel was down in 12th for Ferrari, with both drivers more than half a second slower than Verstappen and Leclerc respectively.

Romain Grosjean, in the top six in both of Friday sessions, couldn’t match that pace in P3, finishing only 13th for Haas, although he was faster than Lando Norris and Daniil Kvyat.