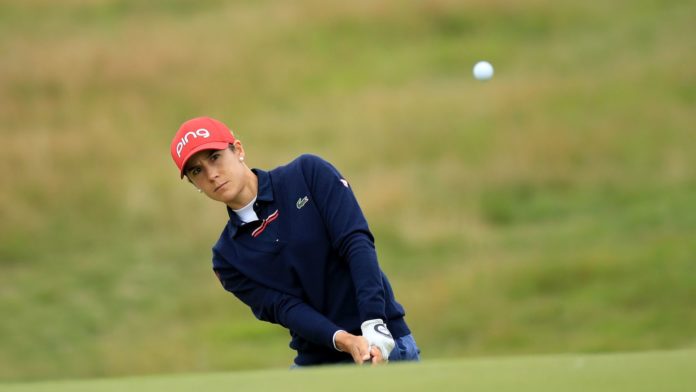 Spain’s Azahara Munoz will take a slender lead into the final round of the ASI Ladies Scottish Open in pursuit of a sixth title on the Ladies European Tour.

Munoz carded a third round of 69 at the Renaissance Club in North Berwick to finish seven under par, a shot ahead of playing partner and former world No 1 Stacy Lewis, who carded a 70.

Lewis’ fellow American Jennifer Song is two shots off the lead on five under, with compatriot Cheyenne Knight and New Zealand’s Lydia Ko a stroke further back.

Munoz, who carded four birdies and two bogeys, said: “I’m enjoying being out there so much. I don’t know, I think this break was really good for me. I just came back and I just want to play golf. I just want to enjoy myself.

“I’m going to do my best so at the end of the day, wherever that puts me, it puts me.

“In the past I think I always get a little upset if things don’t work out or whatever, but I always give one hundred per cent. As long as I do that, that’s all I can do.”

Lewis, who played with Munoz and Song, was frustrated by the slow pace of play as she carded three birdies and two bogeys in her 70.

“I think the biggest challenge for me tomorrow is staying in what I’m doing, and the pace of play is dreadfully slow, and that doesn’t play into my favour,” Lewis said. “The people I’m playing with are pretty slow.

“So that’s honestly going to be my biggest challenge, to figure out with that pace of play how I can get into a good rhythm and how to keep myself in a rhythm of playing golf and not feeling like you’re waiting so long in between holes and shots and different things.”

Ko squandered a five-shot lead with six holes to play in last week’s Marathon Classic but has bounced back immediately and carded a bogey-free 67 on Saturday, the lowest round of the day.

“Almost having a tournament right after makes you focus on what’s right there in front of you and I think maybe less think about what happened at Marathon,” Ko said.

“There’s a lot about what happened to me on the last hole [a double bogey]. But you have to talk about what amazing golf Danielle [Kang] played. I just think it really wasn’t meant to be.”

Kang, who is seeking a hat-trick of victories following back-to-back wins on the LPGA Tour, is five off the lead after a 69.

Watch the final round of the Ladies Scottish Open on Sunday, live on Sky Sports. Live coverage continues from midday on Sky Sports Golf and Sky Sports Mix. The action is also being streamed, for free, live on the Sky Sports YouTube channel!