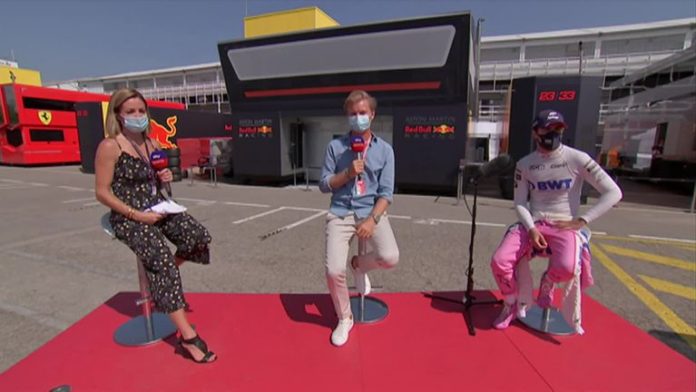 Sergio Perez says he is feeling the effects of two F1 races missed after returning to the track following coronavirus, but was delighted with fourth in Spanish GP qualifying and believes he has a chance at a podium.

Perez missed out on the British and 70th Anniversary GPs at Silverstone after positive COVID-19 tests, but after almost two weeks in isolation is back in the Racing Point car in Barcelona and has impressed on his return.

The Mexican finished just behind Max Verstappen in qualifying to seal a second-row start for Sunday’s race, with team-mate Lance Stroll in fifth.

Asked what the toughest thing was about returning, Perez told Sky F1: “The heat! Especially missing two races with the virus, I’m feeling it already.”

But he added: “I’m pleased with that comeback. The conditions haven’t been easy today, very hot, very windy as well, it wasn’t an easy session out there but I think overall it’s a great result for the team.”

Perez says he will “definitely” be looking forwards rather than behind him in the race, despite Red Bull’s seemingly strong race pace.

“I think if we are able to get a good start and get ahead of Max, we might be able to hold him back because here it’s not an easy place to pass,” he said.

“And the amount of managing we are going to have to do is going to be extreme.

“I think in terms of pace we don’t quite have the pace to beat the Red Bull and especially the Mercedes, but who knows, If we are able to get ahead of Lap One.”