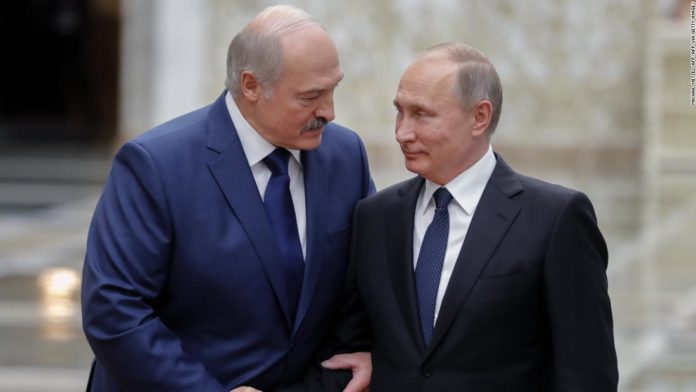 Lukashenko, who has been in power for 26 years, is facing mounting calls by protesters to step down following a highly contested presidential election.
Belarusian authorities say Lukashenko won 80.1% of the vote, in a poll many consider to be rigged.
Protests flared up across Belarus this week, sometimes erupting into violence, with some demonstrators alleging they were beaten and humiliated by security services while in custody.
Lukashenko vowed not to “give up the country to anyone” and rejected foreign mediation to stabilize the situation in his country, while speaking to the Center for Strategic Management at the Belarusian Ministry of Defense, state news agency Belta reported on Saturday.
“We have a normal government created according to the constitution,” Lukashenko said. “We do not need any foreign governments, any intermediaries.
“It seems to me that without offending the leadership of these republics, I want to say: put things in order at your place,” he added.

Allegations of torture appear to have fueled public anger toward the government.
Officials in Belarus say 6,700 people have been arrested and at least one person has been killed in the violent aftermath of the election, which independent observers have criticized as neither free nor fair.
Tens of thousands marched through the capital on Friday, and on Saturday, protesters gathered in Minsk’s Pushkin Square calling for a change, as they took part in a vigil for an activist who died there, according to CNN’s Frederik Pleitgen.
There have also been signs that the country’s military and police officers are turning against the strongman. A video posted on Instagram by a man named Evgeny Novitski shows his brother — a former special forces officer — throwing his uniform into a trash can, saying he is not proud of his job anymore.
Dozens of security officers in riot gear outside several government buildings in Minsk dropped their shields on Friday and were embraced by anti-government protesters, as demonstrators chanted “brothers” at the police.
On Saturday, a CNN team on the ground saw paratroopers march through protesters in the capital in a show of support.
Authorities have now released more than 2,000 people detained amid the ongoing protests, according to a Friday statement from the interior ministry.

Opposition politician Svetlana Tikhanovskaya says she won a majority in last Sunday’s vote.
The independent monitoring group “Honest People” said that according to its data, Tikhanovskaya had won in at least 80 polling stations across Belarus.
Opposition groups claim the vote was marred by widespread ballot stuffing and fraud in order to keep Lukashenko in power.
Tikhanovskaya, who fled to Lithuania after the vote, on Friday urged city mayors to organize peaceful protests this weekend and asked her supporters to sign an online petition demanding a vote recount, with the presence of independent observers.
Foreign leaders have voiced concerns over the election’s aftermath.
The European Union has rejected the results and is working on additional sanctions on “those responsible for violence & falsification,” the EU’s High Representative Josep Borrell Fontelles tweeted Friday at the end of the “good and constructive” meeting of the EU 27 foreign ministers.
US Secretary of State Mike Pompeo reiterated his belief that the elections in Belarus “weren’t free, they weren’t fair,” and said he had been “consulting” with European leaders to get a better understanding of the situation.
He did not respond to questions on whether the US would impose sanctions on Minsk or join other EU countries that have declined to recognize the results.
“The common objective is to support the Belarusian people to achieve their own sovereignty, their own freedom, to build out what you’re seeing happen in these protests,” Pompeo said during a news conference in Warsaw on Saturday with Polish Foreign Minister Jacek Czaputowicz.

CNN’s Jamie Crawford and Claudia Otto contributed to this report.