Home World Pandemic power play: It’s China vs. the US in Latin America 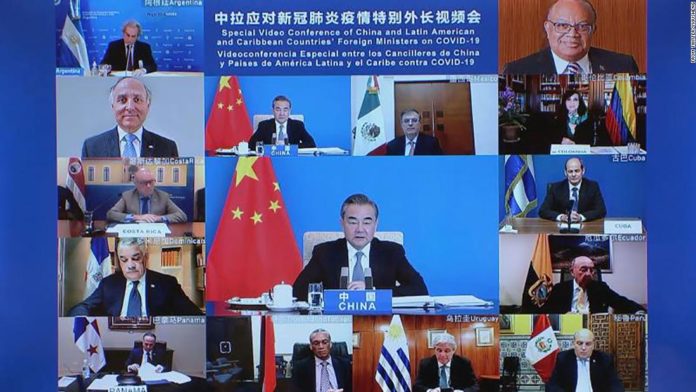 The digital get-together was to announce that Beijing had agreed to give a $1 billion loan to Latin American and Caribbean (LAC) countries to help them secure an eventual Covid-19 vaccine developed by China.
Like most online meetings, and any photos of them, this one was largely dull.
But let’s make it more interesting. Look at the photo again. China’s Foreign Minister Wang Yi looms large in the center of the screen. He’s surrounded by about a dozen foreign ministers from LAC countries. They’re all there, in part, to thank China for coming to their aid.
If you believe that China has ambitions to be a regional and global power, the photo is downright allegorical. China as the sun, other countries orbiting around it, guided by the gravitational pull of the Middle Kingdom’s economic and political might, a force never more apparent than during a global pandemic
It’s a hyperbolic hot take based on a simple photo, I know.
But for many observers of the region, amid a retreat by the United States from its global leadership role and a virus wreaking havoc on lives and incomes, a black-and-white narrative of an ascendant China becoming the dominant force in Latin America and the Caribbean has become commonplace.
The question is: Are they right? The answer isn’t so simple.

China has played a major role in this region since the pandemic first arrived here in force in late March. As the virus swept through country after country, China took action.
It donated at least 150,000 masks and a number of hazmat suits to Brazil, donated dozens of ventilators, monitors, defibrillators and ultrasound scanners to Peru and donated at least 10 ventilators, 50,000 testing kits and 100,000 medical masks to Argentina. Separately, Chinese billionaire Jack Ma’s foundation donated 100,000 masks, 50,000 testing kits and five ventilators to Mexico.
Governments on the receiving end have been appreciative. “Thanks to China for its unwavering support during this pandemic!!!” tweeted Mexico’s Foreign Minister Marcelo Ebrard after medical supplies arrived from China in June. In a July letter, Argentinian President Alberto Fernández thanked China for its support and said he believes bilateral ties will be strengthened.
But the actions listed above represent just a fraction of what China’s been up to lately.
Through the end of June, Chinese entities have conducted close to 300 coronavirus assistance-related transactions across Latin America and the Caribbean, the majority being donations, according to a count by The Inter-American Dialogue, a preeminent think tank focused on the Americas.
“This is motivated not by an interest in humanitarian assistance, which might be part of it certainly, but also by this very clear need on the part of China to ensure that its image remains intact,” said Margaret Myers, who helped compile the count.
China has spent tens of billions of dollars in LAC over the past 15 years, mainly in the form of loans to regional governments for a variety of projects. Nearly 20 countries have signed onto the Belt and Road Initiative, a globe-spanning infrastructure development program that is Chinese President Xi Jinping’s signature foreign policy platform.
Chinese state-owned companies have established large footprints and dozens of China-backed cultural centers have been established across the region.
Taken as a whole, it is a massive investment — one that was at least partially put at risk when China appeared to botch its initial handling of the virus. Local officials in Wuhan covered up the severity of the outbreak, silencing whistleblowers and censoring social media posts that warned of the virus’ rapid spread. Since then more than 21 million people worldwide and counting have been infected.
Just as in the rest of the world, anger at China by some in LAC countries was palpable.
“It’s a little bit of an apology tour,” said Jorge Guajardo, a former Mexican ambassador to China, of Beijing’s aid campaign. “It was like, yeah, we screwed up with the pandemic. But, hey, we’re going to try to be part of the solution, not just part of the problem.”

China steps up as the US steps back…at first

With its own epidemic largely under control, China’s “mask diplomacy” of shipping medical supplies worldwide dominated headlines in March, April and May.
But as the US’ own epidemic got exponentially worse, it did the exact opposite. Rather than sending out personal protective equipment (PPE) and supplies to allies, it froze such shipments and instead distributed supplies domestically.
“China was first out of the gate in providing visible donations, mostly in-kind of masks and respirators,” said Cynthia Arnson, director of the Wilson Center’s Latin American program which has a project tracking coronavirus-related contributions across LAC by both China and the US.
That left China, which the Trump administration routinely blames for the pandemic, looking like the good guy in Washington’s so-called backyard.
At the virtual meeting announcing the $1 billion loan program, Chinese Foreign Minister Wang was quoted by state media as saying, “China will not change the strategic and long-term importance it places on relations with LAC…China-LAC relations will come through even stronger after Covid-19.”
We should note that Chinese aid has not flowed as freely to countries like Guatemala, Paraguay and others that maintain diplomatic relations with the self-governing island of Taiwan, which Beijing views as a breakaway province.
Some believe not engaging more strongly in the region during a time of crisis was, and continues to be, a missed opportunity by the US.
“It’s a gross negligence of leadership,” said Robert Daly, director of the Kissinger Institute on China and the United States. “Have we ever heard the American president say to other nations, ‘We are in this together and we want to work closely with you every day to guarantee the health of all of our people’? That’s not hard to say.”
It is a fact not lost on some in the US federal government, which has taken an increasingly hard line on China.
So the US has stepped up its game more recently — while China has focused more on tangible donations, the US has zeroed in on monetary aid.
The US Agency for International Development has dedicated $141.4 million to its Covid-19 response in LAC since March, according to an agency spokesperson, adding that the agency has “pivoted and redirected our existing programming to respond to Covid-19 in this region.”
The agency has sent more than 1,800 ventilators to seven countries and plans on more in the future.

A global pandemic does not respect borders nor care about international politics. Most experts will tell you one of the best ways to stop the spread of a virus and get supplies where they’re needed most is for all countries to work together.
That is not what’s happening in Latin America and the Caribbean, at least when it comes to the US and China.
“Increasingly, the region is caught up more and more in this geo-political climate where everything is characterized by US -China tension,” said Pepe Zhang of the Atlantic Council, a nonpartisan think tank. “I think Covid aid is one area that is getting politicized as well.”
Latin America and the Caribbean have turned into the latest contest zone for regional influence between the world’s two most powerful countries, with the US and China leaning into a classic pursuit of self-interest above cooperation.
That means aid becomes ad hoc rather than distributed most effectively.
“Governments certainly use foreign aid as an extension of a foreign policy and look to achieve goals that are consistent with values and national security objectives,” said Arnson.
Continuing to develop a new battleground in an increasingly bi-polar world might be folly during a pandemic that is costing hundreds of thousands of lives, but it appears to be happening nonetheless.

On its face, China might appear to have the upper hand. It has fast become the top trading partner for multiple countries in the region.
Brazil’s exports to China, for example, have increased each month since January to their highest levels ever, according to government statistics.
And China’s billions of dollars in recent investments have curried plenty of favor across LAC.
Since 2014, favorable opinions of China climbed 7 percentage points on average in Argentina, Mexico and Brazil, according to the Pew Research Center. The same polls find opinions of the US declined more than 10 points on average across all three nations.
And yet none of the five experts we spoke to for this story believed that China has fully outmaneuvered the United States in the region thus far.
“There has been some ground lost [by the US],” said Ambassador Guajardo. “I don’t think it will be permanent. I don’t think it’ll be filled by China anytime soon.”
For all China’s substantial investment, the US remains the region’s top overall trading partner and a key source of foreign direct investment
Not to mention the US’ long history in the region which, while obviously not remembered fondly by many, did create long-standing impact.
“The US still has such strong ties economically speaking that are quite diverse, there are long standing cultural ties that are so very critical, plus familial ties that China just doesn’t have,” said Myers.
This also assumes China actually wants to take on the mantle of global leader rather than just seek out resources and riches around the world, which experts debate to truly be the case.
Even the widespread praise for China’s donations during the pandemic will not be enough to truly move the region into China’s camp, according to every expert we spoke to.
“I think it’s mostly transactional, in the moment, these countries trying to get any sort of assistance that they can,” said Myers on public displays of gratitude from LAC to China.
One potential game-changer for China in the region: A widely distributed, easily obtainable vaccine.
If a Chinese firm came up with a workable vaccine that could be widely distributed and, in part due to the $1 billion loan that China just announced, actually allowed countries to substantively move past the worst collective crisis in modern history, well, that would be a big deal.
“That’s the type of event that is so momentous, [the public] will realize that somebody is helping us and others are not. That would be the big game changer, much more than face masks, gowns or goggles,” Ambassador Guajardo said.

‘We don’t need somebody to hold our hand’

Ultimately, though, it is not up to China or the US to decide who wields the most influence throughout Latin American and the Caribbean.
Those with the most agency over that result, of course, remain the region’s countries themselves.
And they know full well the consequences of colonialism and external interference, promulgated here most prominently by Europe and the United States. They are also no strangers to the economic and political bullying that go with them.
“They’re not simply going to swoon over whichever country, you know, offers them more money or more PPE,” said Daly. “I just think that’s a gross misread and we’re way beyond that. These countries have complex interests and complex understandings of geopolitics.”
Amid a global pandemic that has upended life, sapped incomes and could threaten economies for a generation, there is no doubt the region will need strong international relationships to right the ship.
But the idea that either China or the US has to ride in on a white horse to save the day is seen by some not only as simplistic, but condescending.
“We’re grown-ups, we can walk on our own,” Guajardo said. “We don’t need somebody to hold our hand.”

CNN’s Shawn Deng and David Culver contributed to this report.