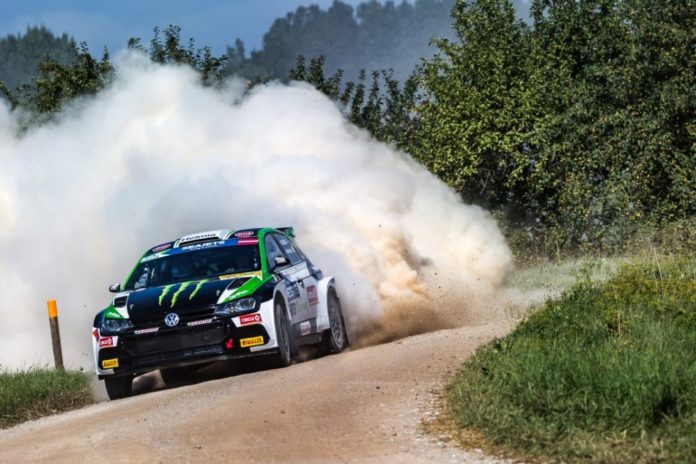 Oliver Solberg proved too fast for his FIA European Rally Championship rivals on Rally Liepāja’s high-speed roads this afternoon. Driving a Pirelli-equipped Volkswagen Polo GTI R5, the 18-year-old was quickest through two out of four stages around the town of Talsi to hold an overnight lead of 10.0s.

Co-driven by Ireland’s Aaron Johnston, Solberg could have been further ahead had he not dropped vital seconds with a stall on the very first stage and a spin on stage four following a loss of visibility due to dust.

“It was quite an exciting day,” said Solberg. “The first launch this morning I stalled because there was a bit better grip than I thought. I was a bit too optimistic with my RPMs and I lost five seconds. I was too slow on stage two, I just took it too careful because it was so slippery and I didn’t want to take risk. This afternoon there was a big push on stage three and stage four. But there was so much dust and it was so slippery so I had a spin on a slow left and I had to wait because there was so much dust everywhere. I lost maybe 15 seconds, it’s crazy. But, in the end, I’m still leading. A 10-second lead is not a lot but on these fast roads it’s at least a small margin, which is nice for tomorrow.”

World-level winner Mads Østberg, who is competing in Latvia to prepare for the FIA World Rally Championship-counting Rally Estonia next month, is second despite reporting “some issues” causing him to lose time on Saturday’s closing stage.

Alexey Lukyanuk, the ERC title leader following his impressive Rally di Roma Capitale victory last month, is third but frustrated that the combination of his higher running order and a not entirely satisfactory set-up is masking his ultimate speed behind the wheel of his Saintėloc Junior Team C3 R5. But with Østberg not eligible for ERC points, Lukyanuk is well placed to extend his title advantage.

Finnish newcomer Eerik Pietarinen is fourth ahead of Craig Breen in a Team MRF Tyres-entered Hyundai i20 R5. Breen’s team-mate Emil Lindholm slipped to sixth after spinning on stage four. The Finn is followed by Grégoire Munster and Mikko Heikkilä, who, like compatriot Pietarinen, is making his ERC debut this weekend in a TGS Worldwide Škoda Fabia.

Estonia’s Raul Jeets and Czech hope Erik Cais (Yacco ACCR Team) round out the top 10 with Motorsport Ireland Rally Academy’s Callum Devine next up. By finishing day one in P10, Cais will open the road on Sunday’s closing leg under the reverse-seeding rule.

Rallye Team Spain’s ERC3 Junior champion Efrén Llarena, who is making his debut on gravel in a Rally2 car, is P12 followed by Sean Johnston. Like Llarena, American Johnston – an ERC3 graduate – had never rallied his Citroën C3 R5 on gravel prior to Rally Liepāja getting underway shortly after midday.

Germany’s Dominik Dinkel (Brose Motorsport), Simos Galatariotis, who has travelled from Cyprus to make his Rally Liepāja debut, and ORLEN Team’s Polish champion Miko Marczyk, complete the ERC-scoring drivers at the end of leg one. ERC1 Junior contender Dinkel has been hampered running first on the road, while Marczyk was in the top 10 until a puncture and a slow tyre change dropped him outside the top 20.

Tibor Érdi Jr has made an instant impact on his European championship return by leading ERC2 from the outset followed Dmitry Feofanov and newcomer Ainārs Igaveņš from Latvia. Championship leader Zelindo Melegari is fourth but at odds with the set-up of his Subaru Impreza.

Hometown hero Mārtiņš Sesks grabbed the combined ERC3/ERC3 Junior lead from Ken Torn when the Estonian was inadvertently delayed through stage four by Miika Hokkanen, who was slowed by a brake issue. Sesks revealed at the regroup in Liepāja that he had damaged his Ford Fiesta Rally4’s steering nudging a bank. Swede Dennis Rådström is third followed by Latvia’s double European Rallycross champion Reinis Nitišs. Gregor Jeets is fifth with Adam Westlund sixth. A puncture delayed Rallye Team Spain’s Pep Bassas, while Nikolai Landa lost time with a power issue in the morning, which his DriftCompany Rally Team mechanics fixed at the remote service in Talsi. Amaury Molle, Sergio Cresta and Rachele Somaschini are next in the order.

Andrea Mabellini, competing on gravel for the first time, tops the Abarth Rally Cup after long-term leader Dariusz Poloński crashed out in dust clouds on stage four. Martin Rada, another gravel notice, is second. Poloński is aiming to restart on leg two.

Nikolai Gryazin, the ERC1 Junior champion from 2018 and a time-time Rally Liepāja winner, had closed to within 1.3s of Oliver Solberg after two stages then crashed out two stages later. The Russian hopes to restart on day two providing his Hyundai can be repaired.

What’s next: The eighth running of Rally Liepāja concludes tomorrow (Sunday 16 August) with an action-packed leg consisting of six special stages over a competitive distance of 87.66 kilometres. The 16.45-kilometre Liepāja (Vecpils) stage is first up from 10h00 CET live on Facebook and ERC Radio.