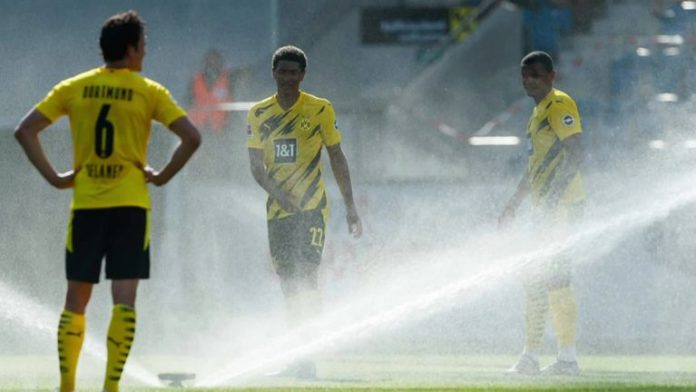 Bellingham: “The pressure I put on myself is more than the pressure of any price tag. I will try and do the best for me and this club regardless of the price tag”

Jude Bellingham says any pressure from becoming the most expensive 17-year-old in world football pales in comparison to his own high standards.

The much-talked about midfielder joined Borussia Dortmund from Birmingham last month for a record-breaking initial fee of £25m and had his first run out for his new club earlier this week in a 6-0 friendly win against Austrian side SCR Altach.

Bellingham insists that, if anything, the transfer fee Dortmund shelled out for his services will only spur him on to hit the heights and repay the faith the Bundesliga club have placed in him.

Asked if he felt his price tag brought any additional pressure, Bellingham replied: “No, not really. It’s almost a nice thing to have, BVB putting that much faith in me to deliver.

“But, for me, the pressure I put on myself is more than the pressure of any price tag or [expectation from any] media outlet. I will try and do the best for me and this club regardless of the price tag.”

Bellingham had spent the last decade at hometown cub Birmingham but said he did not have to think twice once it became clear he had the opportunity to join Borussia Dortmund.

“The hardest thing about leaving Birmingham was because I had been there so long,” he said.

“It felt like they were a massive part of me, being a fan and then working [my way up] all the way through the academy and playing for the first team.

“But I think in life you have to take opportunities, and this is a huge one for me to come and play for such a big club. It wasn’t a hard one [decision] for me to come here.”

Dortmund have finished runners-up to Bayern Munich in five of the last eight Bundesliga seasons since Jurgen Klopp guided the club to back-to-back titles between 2011 and 2012.

Bellingham says part of the reason he signed for Dortmund was the challenge of trying to deliver the success he believes the club’s fanatical supporters deserve.

“I want to achieve everything possible, but you have to be realistic,” the England U17 captain said.

“I think, the way this club is moving, I think we can definitely try and challenge for the title as we have done in the last few years. We’ll try our best to do that.

“It’s a huge club with an amazing fan base. I think they deserve titles and trophies. Obviously I can’t guarantee that – but I will say that I will give everything to try and achieve that.”

Bellingham played in variety of midfield and more advanced roles during his brief senior Birmingham career but is clear about his preferred central midfield position, adding he wants to learn from his new team-mates before challenging for a regular starting place of his own.

“I think a strength of my game is I can be versatile and get on playing anywhere the coach wants me to, whether that’s out wide or in the middle,” he said.

“Each of them [the club’s midfielders] have amazing traits and amazing qualities that I can take and add to my game.

“I’ve got stuff as well, so it’s a chance for me to compete with these guys. We’re all team-mates and we’re all focused on trying to get Borussia Dortmund as far as we can this season.”