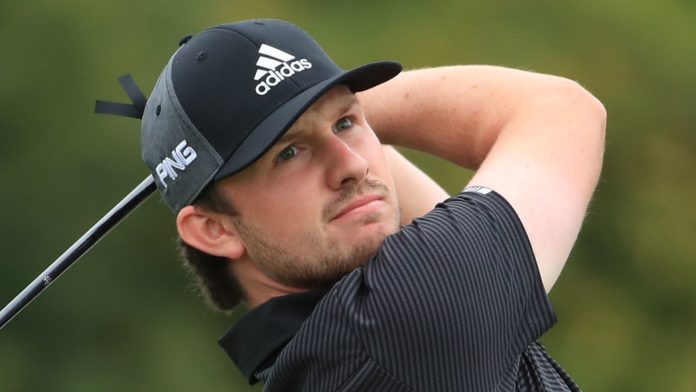 Connor Syme fired a bogey-free 63 to jump ahead of halfway leader Sam Horsfield in the third round of the Celtic Classic in Wales.

Syme was four strokes off the lead overnight, but he coasted to the turn in three under and then birdied five of the last eight holes in an inward 30 which earned him the outright lead on 15 under as Thomas Pieters, who led after two eagles at the ninth and 11th, triple-bogeyed the 15th and bogeyed the next to slip to 11 under.

Horsfield, chasing his second win of the month following his breakthrough victory at the Hero Open, also kept a clean card but managed only three birdies in a solid 68 which kept him a shot ahead of Sebastian Soderberg, while Andrew ‘Beef’ Johnston goes into the final round just three off the pace.

Syme emerged as the man to beat on Sunday after his eight-birdie effort, although his lead could have doubled had he completed a full-set of par-five birdies at the last, but the 25-year-old is happy with his all-round game as he looks for his maiden European Tour title.

“I just played lovely, to be honest,” said Syme, who was fourth at the Austrian Open last month but then struggled in the early stages of the UK Swing before seeing signs of encouragement during his top-20 finish at last week’s English Championship.

“I got off to a decent start. I maybe didn’t play the front nine as well as I’d like but I managed to get to three under through nine, which was great. I holed the putts that I had opportunities on so it was a nice base to build on. It was nice throughout, really.

“I felt like I played well in Austria, the first event back, but then a bit slow after that to start the UK Swing. I’m finding a bit of form. I made the cut at the Hero Open and then gradually a little bit better last week. I found something a little bit in my swing and I’m just rolling with that really.”

Horsfield admitted he was “waiting for the putter to get hot” as he parred the opening eight holes before picking up his first birdie of the day at the ninth, and his patience was tested further on the back nine as he converted just two further chances at 14 and 16.

“I actually stayed really calm out there,” said the Englishman. “I felt like I was actually playing really well, I hit a lot of greens and, walking up nine, I was just waiting for my putter to get hot. I didn’t take advantage of the easy holes on the back nine but I’m happy with the position I’m in.”

Soderberg matched Syme’s inward 30 to return a 65 and climb to 13 under ahead of Johnston (68), Belgian Thomas Detry (68) and Poland’s Adrian Meronk, who zipped round in 64.

Pieters birdied three of the first five holes looked on course for the 54-hole lead when he drained two huge putts for eagle either side of a bogey at 10, but the former Ryder Cup star’s challenge began to unravel at the 15th.

After a poor drive forced him to take a penalty drop for an unplayable lie, he then found a hazard and ran up a triple-bogey seven which he followed with a bogey at 16 before stopping the rot with two closing pars as he stayed four shots behind Syme.