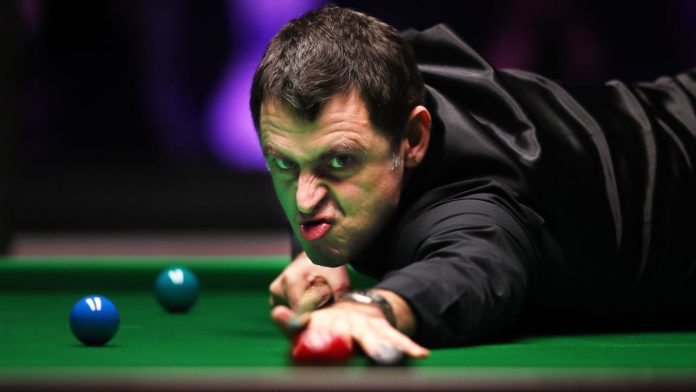 Ronnie O’Sullivan leading 10-7 in the race to 18 frames. ‘The Rocket’ aiming for sixth World crown and record 37th ranking title; Wilson playing in his maiden final

Ronnie O’Sullivan took a three-frame advantage after a testing opening day of the World Championship final against Kyren Wilson at the Crucible.

Both players seemed spent from their respective epic semi-final wins over Mark Selby and Anthony McGill and having led 8-2 at one stage, the five-time champion was fortunate to emerge from the session with a 10-7 overnight lead.

In front of fans who were allowed back in the Crucible for the first time since the tournament’s opening day, O’Sullivan seemed to be battling the conditions and cut an increasingly frustrated figure throughout the contest.

Both elements of the favourite’s game were evident in the opening half-session, in which despite numerous errors he summoned back-to-back breaks of 80 and 75 to fashion a 3-1 lead.

But there was never the sense that O’Sullivan was in shape to exploit his opponent’s evident inability to settle, with a loose response from the 44-year-old enabling Wilson to reduce the arrears.

O’Sullivan proceeded to reel off the next five frames in succession without looking entirely comfortable, as the pair traded errors and rendered the drama of their respective Friday semi-finals a distant memory.

O’Sullivan’s first century, a 106 in the seventh frame, proved his most notable visit but it was mostly a case of sweeping up to clinch frames after Wilson had failed to take an opportunity.

Wilson’s form looked to have completely deserted him when he missed a black off its spot in the 10th frame, as O’Sullivan made it 8-2 despite looking unhappy with aspects of his game.

Wilson stopped the rot with a fine break of 93 to make it 8-3, and with O’Sullivan’s body-language exuding resignation, he proceeded to capitalise on his opponent’s sloppy play to pull back to 8-6.

An unfortunate in-off in the next frame, when Wilson potted a brave blue only to see a red sneak into the top left pocket, handed O’Sullivan the opportunity to restore his three frame advantage.

Clearly growing to his task, Wilson recorded his first century break of the match, a clinically-taken break of exactly 100 which made it 9-7 and left O’Sullivan idly swinging his cue in his chair prior to the final frame of the day.

It was a frame that encapsulated a frustrating day as Wilson beached on 29, O’Sullivan was denied a frame-winning break by a dreadful kick, before Wilson missed a potentially frame-winning red down the top cushion, and O’Sullivan
stepped in to clear for a barely deserved 10-7 overnight lead.