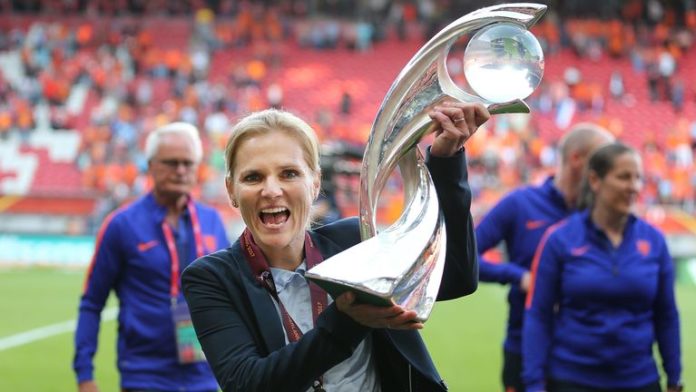 England have reached the semi-finals of the past two World Cups and the final four of Euro 2017, where they were beaten by a Netherlands side managed by Wiegman, who will replace Phil Neville following the conclusion of next year’s Olympic Games.

Her appointment, Smith told The Women’s Football Show on Sky Sports, will have been made with bringing an end to the silverware drought in mind.

“She’s been brought in to do that because England have been so close on so many occasions,” she said.

“When we lost to Japan [in 2015] to an own goal that was so close and even when we were beaten by the United States [in 2019], who are a great side, it was all about the small margins – Steph Houghton’s missed penalty, the offside goal.

“Whether it’s about tactics or a winning mentality, she has something that can take England on to win something and you have to believe that.

“When a manager comes in who has already won things, as a player you look to them and you want to learn from them because you want to win things too.”

‘Player know-how will be vital’

Faye White believes Wiegman’s rapport with her players – and the ability to get the best out of them – will stand her in good stead when she takes over as England head coach in September 2021.

“When you’re a player you just want to know you’ve got a manager with real calibre and then it’s about building that belief in everyone in the squad,” she said.

“You look at her tournaments and the teams she puts out and she doesn’t really change the line-up that much, like Phil [Neville] and Mark [Sampson] have done previously.

“It’s a positive purely because of what she’s achieved – she was only in post with the Netherlands for six months before she won the Euros in 2017 but knew what made the players tick because she had been an assistant prior to that.”

Smith feels Neville leaves something of a mixed legacy for his work with the Lionesses, with a clear area of improvement for new coach Wiegman to focus on.

“What Phil has achieved is, he’s raised the profile of the women’s game and I think that has been really important – it’s getting more media attention and more people are taking notice of the England women’s team.

“He’s maybe brought in new fans, which I think is great. If you’re talking about progression in terms of the way they’ve played and winning things then I think that hasn’t been great.

“He’s been criticised for maybe over-praising his players and he’s stuck by his players and said how well they’ve done when we’ve seen the game and it hasn’t been like that.

“In a way I quite like that, as long as he’s then telling the players off-camera what they need to do to improve. He’s tried to change that mindset that maybe we had before where you’d be beaten by the US or Germany before you’d even stepped on the pitch.