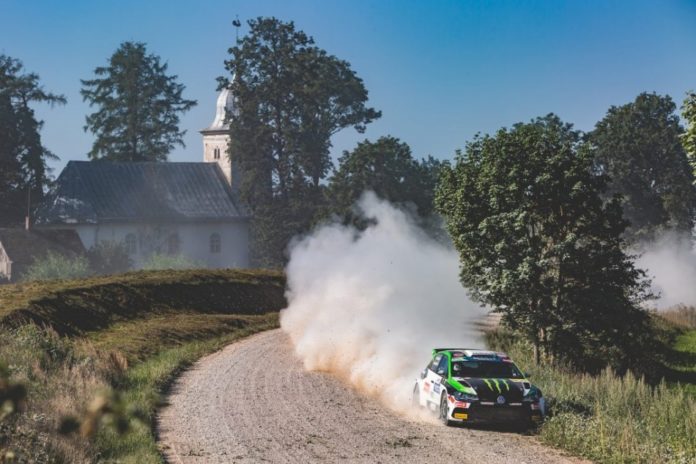 Oliver Solberg has further underlined his status as one of international rallying’s top talents with a second consecutive victory on Rally Liepāja, the fastest round of the FIA European Rally Championship.

Solberg, 18, and co-driver Aaron Johnston led from Saturday afternoon’s opening Talsi stage and overcame a late scare to win in their Pirelli-equipped Volkswagen Polo GTI R5 ahead of Mads Østberg and Alexey Lukyanuk, who maintains his ERC title advantage by four points.

Afterwards, Solberg, whose father Petter won the FIA World Rally Championship in 2003, said: “It’s been very tough, not an easy rally I tell you. It was very hectic starting with the stall but I kept pushing. Then we lost 20s with the spin on the final stage yesterday. I tried to push and build a bigger gap today and the tyres and the car were fantastic. For the first half of stage eight we were on three cylinders but in the second half the engine started working again and I pushed like mad. We were lucky the engine started working again because I was very worried.”

Using the event to prepare for Rally Estonia, his next world outing, Østberg’s focus was on fine-tuning the set-up of his PH Sport Citroën C3 R5 and adjusting to high-speed competition once again having not driven since Rally Sweden in February. But with Østberg not eligible for ERC points, Lukyanuk will leave Latvia with points for second. “It was a very amazing race,” said the Saintéloc Junior Team driver “We were flat out all the way. I tried to push and we scored good points and I’m happy with my performance.”

Leg two round-up: Solberg claims impressive victory
Oliver Solberg began leg two with a 10.0s advantage following a strong opening day. After dropping 0.1s to Mads Østberg on Sunday’s first stage, he went quickest on the next run to go 13.8s clear. With another stage win on SS7, which came after the struck a marker pole, Solberg returned to service in Liepāja 22.4s in front and seemingly in the clear.

However, an engine issue on stage eight caused the 18-year-old real concern, but the problem cleared for SS9. Rather than cruise to the finish, Solberg was on the attack on the deciding SS10, which he won to claim a second Rally Liepāja victory by 20.1s.

Craig Breen demoted Eerik Pietarinen for fourth on SS5 with Callum Devine overtaking Erik Cais – opening the road for the first time in his career – for P10. But Devine’s challenge ended when he rolled heavily on SS6, thankfully without injury to either he or co-driver Brian Hoy.

Breen then lost time with a damaged rear-left tyre on SS7, which he drove on for 12 kilometres. It was caused by the Irishman inadvertently running over a corne marker, which had fallen on the road afte being hit by another car. The delay dropped him to sixth as a result with Pietarinen moving back up to fourth with Emil Lindholm fifth initially. But a heavy landing followed by an off delayed the Finnish ERC1 Junior driver and he eventually came home 1.8s behind his team-mate. Breen and Lindholm are competing in the ERC as part of the MRF Tyres’ development programme.

Ken Torn won ERC3/ERC3 Junior after Mārtiņš Sesks retired at the end of SS8 with a broken radiator, the result of a heavy landing. Martin Rada profited from Andrea Mabellini’s exit with a mechanical issue to win the Abarth Rally Cup on his debut, while Tibor Érdi Jr overcame an engine fault to win ERC2 on his championship return.

Late heartbreak for ERC3 Junior Sesks…
Mārtiņš Sesks has suffered late heartbreak on his home round of the FIA European Rally Championship. Starting the closing loop of three stages leading Ken Torn by 2.8s, Liepāja-born Sesks reached the finish of stage eight with smoke bellowing from his Ford Fiesta Rally4. Although he was able to pull away from the stage stopline, he soon parked up to investigate the problem. “It’s a broken radiator,” the dejected Sesks said. “After a big jump loads of little stones came in. It’s a very big disappointment.”

…but more joy for Torn
Ken Torn made it two ERC3/ERC3 Junior wins in succession in his Pirelli-equipped Ford Fiesta Rally4. Although he ultimately benefited from Mārtiņš Sesks’ retirement, the Estonian had closed to within 1.1s with two stages remaining. Dennis Rådström and double FIA European Rallycross champion Reinis Nitišs completed the podium with Gregor Jeets, Miika Hokkanen and Adam Westlund rounding out the top six. Pep Bassas (Rallye Team Spain), Nikola Landa, Sergio Cuesta and Rachele Somaschini were next up on their Rally Liepāja debuts.

Double ERC2 champion Erdi Jr holds on
Tibor Érdi Jr made an instant impact on his return to the FIA ERC2 category with victory in his family-run Mitsubishi Lancer. But having dominated the high-speed gravel event from the start, the Hungarian endured a never-wracking finish when his car’s engine dropped on to three cylinders. Despite stopping twice on the final stage, he was able to reach the finish ahead of Latvian driver Ainārs Igaveņš. Dmitry Feofanov was on course for second but dropped behind Igaveņš when a power issue struck on SS7. Zelindo Melegari extended his championship lead in fourth.

Abarth Rally Cup newcomer Rada profits from Mabellini’s misfortune
Martin Rada claimed a debut victory in the Abarth Rally Cup, taking advantage of problems for rivals Dariusz Poloński and Andrea Mabellini. Poloński, from Poland, crashed in dust on stage four and was a non-starter on Sunday due to damage. Italian Mabellini, competing on gravel for the first time, inherited first place only for a mechanical issue to force his retirement during Sunday’s penultimate loop. Following his triumph, Czech driver Rada said: “I was enjoying the driving on gravel. It’s my first start on gravel with a rear-wheel-drive car, I only did one gravel rally before but with front-wheel drive. It was not so easy and the grip was different in places, but I enjoyed and even though I came here only to learn.”

Gryazin thanks team for overnight repairs
Nikolay Gryazin thanked his Red Grey Team for helping him to finish Rally Liepāja. The double event winner was in the victory fight when he crashed out on Saturday’s closing stage. But following extensive overnight repair by his mechanics, Gryazin and new co-driver Konstantin Aleksandrov were able to restart on Sunday morning. “The team did a really great job to repair the car and I really want to say thank you to them,” said Gryazin, the 2020 ERC1 Junior champion. “Yesterday I did a little mistake in the braking trying to increase the speed. It happens so it will be a good lesson for me. It was a left corner 10 kilometres from the start, quite an easy place. On the braking I lose the car and I go wide. The damage was on the front and a bit on the roof. The team made the roof more straight, fitted a new window and there was something they changed with the powersteering pump, and they radiator. They did not get much sleep.”

Rally Liepāja organisers praised for COVID-19 response
Rally Liepāja organiser, RA Events, was widely praised for its COVID-19 response management. As well as implementing a number of health and hygiene checks, the cmopany implemented a stringent testing programme which required stakeholders to be tested for COVID-19 before travelling to Latvia and on arrival at a dedicated laboratory.

P1 Racing Fuels Podium Challenge awards drivers
The P1 Racing Fuels Podium Challenge, run for the first time during the 2019 ERC season finale in Hungary, continued on Rally Liepāja. It rewarded the top three finishes in ERC1 and ERC2 with fuel vouchers that can be exchanged for P1 XR5 race fuel at subsequent events, helping competitors to further reduce the cost of competing. Across both categories, the winning drivers received 150 litres of fuel, while the second and third placed drivers received 100L and 50L respectively.

What’s next? Round 3 of 6, Azores Rallye, 17-19 September: Based on the mid-Atlantic Ocean archipelago’s largest island of São Miguel, the rally turns 55 in 2020 and remains one of the most spectacular events on the international calendar. Stages criss-cross breath-taking scenery and lush countryside and are characterised by their sandy surface and narrow and undulating nature. And because the timed tests are often no wider than the width of a car, there is simply no margin for error, particularly on the Sete Cidades test along the rim of a volcanic crater lake. Changeable weather is also a factor with conditions switching from sunshine to showers and fog patches