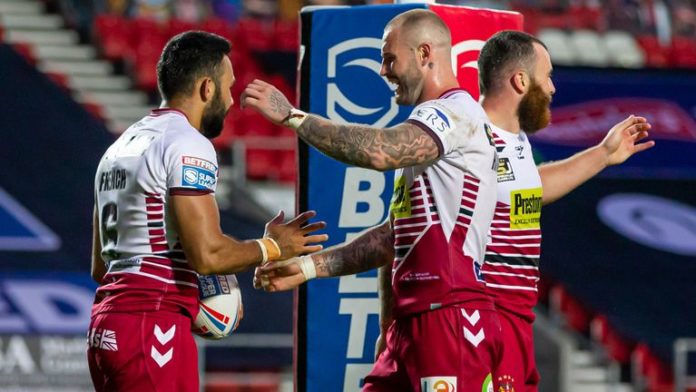 Wigan stalwart Liam Farrell scored his 100th try for the club to lead them back to the top of Super League with a 28-10 win over Leeds.

The 30-year-old England back rower, who was made captain on his 256th appearance in the absence of Sean O’Loughlin and Thomas Leuluai, scored the first try of the match at the Totally Wicked Stadium to put his side on their way to a second win from two matches since the resumption.

The Warriors paid tribute to former Leeds half-back Rob Burrow by wearing shirts embroidered with his name but their generosity did not extend to the current players as they condemned them to a second-successive defeat.

Yet the Rhinos showed marked improvement on their 48-0 rout by St Helens, which prompted coach Richard Agar to accuse them of lacking effort.

They were somewhat unfortunate to trail 12-4 at half-time and were still in contention until Jake Bibby touched down for Wigan’s fourth try six minutes from the end.

Another England second rower, Joe Greenwood, who had a loan spell at Leeds earlier in the year without playing a match, returned for Wigan to make his 100th Super League appearance but it was their classy backs who stole the show.

Farrell had a try in the fourth minute ruled out for a double movement – Leeds right winger Luke Briscoe was also denied because of an obstruction – but the England back rower made amends after 14 minutes when he sliced through the Rhinos defence for his landmark score.

Former Leeds favourite Zak Hardaker added the conversion but the Rhinos hit back midway through the first half when a one-handed pass out of the tackle by prop forward Matt Prior got left winger Tom Briscoe over at the corner, although slow-motion replays appeared to indicate he put a foot in touch.

Hardaker’s second goal made it 12-4 but Leeds forced two goal-line drop-outs in quick succession early in the second half and second rower Bodene Thompson went close to scoring on his debut as they forced Wigan into some desperate defence.

Wigan looked to have secured victory when French and Hardaker combined to get right winger Dom Manfredi over on the overlap but Leeds kept themselves in it when substitute Liam Sutcliffe went through a gap for their second try after 64 minutes.

Martin’s goal cut the deficit to six points but Leeds were reduced to 12 men for the last 10 minutes when captain Luke Gale was sin-binned and Wigan took full advantage.

Hardaker was wide with a penalty attempt but Bibby scored a breakaway try to put his side two scores in front and French followed up a kick by Jackson Hastings for his second try, with Hardaker taking his goal tally to four from six attempts.