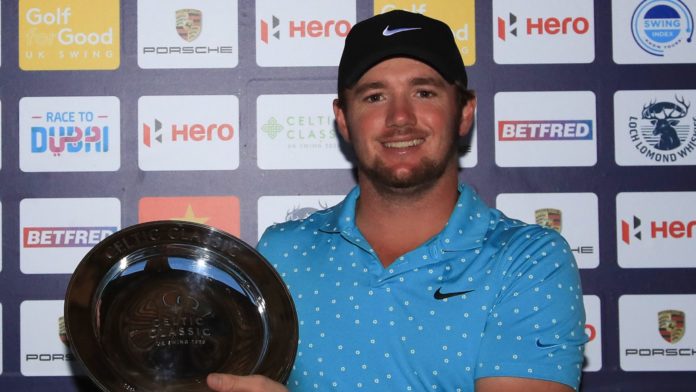 Sam Horsfield secured a second European Tour title in three weeks with a two-stroke victory at a weather-affected Celtic Classic.

The world No 133 carded a bogey-free 67 at the Celtic Manor Resort, closing his round in near-darkness to end the week on 18 under and stay clear of nearest challenger Thomas Detry.

“My goal this weekend was to have no bogeys and I was able to do that, made a huge putt on 17 to keep that alive,” Horsfield told Sky Sports. “I just played solid all week and to have a nice cushion coming to the last was nice.

“I never really felt nervous or uncomfortable, maybe because I was in the situation a few weeks ago. The birdie on 14 was huge because it gave me the option to lay-up on 15, where there is so much trouble.”

Going into the final day a shot off the lead, Horsfield followed back-to-back birdies from the third by rolling in a 12-footer at the seventh to open up a three-stroke advantage.

Horsfield got up and down from the sand to save par at the eighth just before a two-hour weather delay due to the threat of lightning, with a run of pars when play resumed ended with a long-range birdie at the 14th.

Syme dropped a shot at the driveable 15th after two poor chips and then missed a close-range birdie opportunity at the 17th, where Horsfield held a 20-footer to save par and take a two-shot lead to the last.

Horsfield elected to lay up on the par-five 18th under rapidly fading light and sealed his victory with a two-putt par, moving him top of the UK Swing mini order of merit and lifting him inside the world’s top 100.

Detry matched Horsfield’s 67 to finish runner-up to the Englishman for the second time this month, having also had to settle for second at the Hero Open, while Pieters jumped into tied-third by birdieing his last four holes.

A final-hole bogey dropped Adrian Meronk into tied-sixth with John Catlin, Sami Valimaki and David Horsey, while Gavin Green carded a round-of-the-day 63 to jump into the group on 12 under.