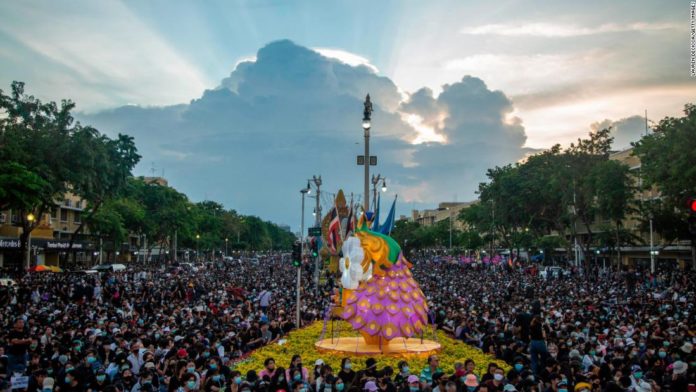 The protest was the biggest anti-government rally since the military seized power six years ago, and came after a month of almost daily demonstrations started by students across the country that have since attracted a large cross-section of society.
Anger among disaffected youth has been bubbling since before the March 2019 elections, which gave General-turned-Prime Minister Prayut Chan-o-cha another four years in office. But on Sunday, young and old were seen calling for democratic reforms, changes to the military-written constitution, and for the dissolution of parliament.
“I am so thrilled to see a lot people turned out to join the protest today,” said Arnon Nampa, one of the protest leaders. “The movement has gone beyond just the youth group — as you see there are more older people, and some of them even attended the protest with their family.”
Nampa, a human rights lawyer, was arrested and briefly detained on August 7 on sedition charges relating to an earlier protest he had attended.
“I am not afraid, I have been waiting for this moment for a very long time. The court granted me bail, I should not repeat the same offenses but it doesn’t mean I can’t exercise my rights under the constitution,” he said.
A small but increasingly vocal group is calling for reform of the monarchy — a radical idea in Thailand, where the powerful royal institution is regarded by many with deity-like reverence. The country has some of the strictest lese majeste laws in the world and defaming the king, queen, heir-apparent or regent can mean a 15-year jail sentence.
The law has increasingly been used as a political tool, as ordinary Thai citizens — as well as the government — can bring charges on behalf of the King.
Those who have fallen foul of the law in the past include one man accused of “liking” a Facebook page deemed insulting to the late King Bhumibol Adulyadej and posting a sarcastic photo of his pet dog.
But grievances once whispered in the private confines of living rooms are now being publicly aired over speakerphone to thousands of listeners, expressing the extent of protesters’ disillusionment with Thailand’s governing institutions.
“It’s very radical and could be a turning point,” Pavin Chachavalpongpun, associate professor at the Center for Southeast Asian Studies at Kyoto University, said of the calls for royal reform. Pavin, an exiled Thai dissident himself, said Thailand “has long had a tradition of putting the monarchy above everything else. The monarchy is revered, you have to love it unconditionally.”

Although absolute monarchy was abolished in Thailand in 1932, the monarch still wields significant political influence.
On August 10, another protest at Bangkok’s Thammasat University laid out a series of 10 demands for reform that boil down to ensuring a genuine constitutional monarchy that places the monarch under the constitution.
King Bhumibol, who reigned for 70 years until his death in 2016, was beloved by many in the country. He was seen as a stable father figure throughout decades of political turbulence, who worked to improve the lives of ordinary Thais and exercised moral authority.
His son, King Maha Vajiralongkorn, who assumed the throne in 2016 and was crowned in May 2019, doesn’t hold that same moral authority. Due to the lese majeste law, CNN has limits in reporting the full context surrounding the Thai monarch.
Experts say demands for monarchy reform have previously only been made by fringe groups, and protesters are changing the game by talking about such issues so publicly and openly.
“The protests in Thailand are historic because this is the first time in Thailand’s history that urban demonstrators have demanded such reforms,” said Paul Chambers, a lecturer and special adviser at Naresuan University’s Center of ASEAN Community Studies.
“It is important to understand that, with a large group of demonstrators demanding monarchical reform, the cat is out of the bag for the first time, meaning that henceforth monarchical reform is a valid demand for Thai demonstrators.”
Observers say this is a crucial time for Thailand. Calls for monarchy reform could alienate large numbers of protesters, but pushing too hard could spark a violent backlash or a military crackdown, which could ultimately serve to draw more support for the movement.
In July, Prime Minister Prayut said he was “worried and concerned about this movement” and warned protesters against violating the monarchy.
“I feel for our children, youths and university students and I also share their parents’ worries too. But there must be a vigilance about violations, I think people won’t tolerate it and allow an incident like this to happen again.,” he said.
While no protesters have yet been arrested on charges of lese majeste, at least two protest leaders — Nampa and Parit Chiwarak, a core leader of the Student Union of Thailand — were arrested on other charges, before being released.

The protesters’ anger has been fueled by a multitude of what they say are injustices: from the military’s continued hold on power, the prolonged coronavirus state of emergency — which they say is being used to stifle political opposition and free speech — to a flailing economy that offers them little job prospects, and the disappearance of democracy activists living in exile.
Protest organizers Free People, a coalition of student groups, on Sunday called for the end of military coups and an unelected national government. The sudden transfer of power in 2014 was the 12th time the military had taken over since Thailand became a constitutional monarchy in 1932.
Chanting “dictatorship must be destroyed” and “democracy shall prosper,” protesters demanded authorities stop intimidating those who come out to exercise their democratic rights.
Many have taken inspiration from movies to illustrate their demands. Some dressed in Harry Potter costumes and chanted verses from the popular franchise to dispel dictatorship. Protesters have used the Harry Potter theme at previous rallies, with protest leaders saying it represents the fight to remove the military from politics and protect the peoples’ rights and freedoms.
Led by people on stage, protesters sang a Thai version of “Do You Hear The People Sing?” from “Les Miserables.” The song was core anthem of Hong Kong’s anti-government protests, which rocked the city for six months in 2019.
Protesters also flashed the three-fingered salute from the “Hunger Games” movie franchise, which has become a symbol of defiance against the Thai government since the 2014 military coup.
One high school girl attended the protest in her school uniform along with her boyfriend. They used gaffer tape to cover the name of their school and to hide their identities.
“I really wanted to join the protest, my parents don’t know I am here. If I told them they would have stopped me. I want Thailand to be (a place) with more freedom of speech. We are not brainwashed, we know what is happening in Thailand,” said the girl, who didn’t give her name for fear of reprisals.
Her boyfriend, who also didn’t want to give his name, said, “Our country doesn’t belong to just one single group or like-minded people, we should be able to be different and have our own thoughts.”
At schools in Bangkok and southern Thailand on Monday, video posted to social media showed students singing the national anthem while wearing white ribbons and making the three-fingered salute. Traditionally, Thai citizens are supposed to stand still to pay respects to the anthem — played twice daily in public spaces — and the rule is even stricter in schools.
CNN cannot independently verify the videos.
Wanting a fresh kind of politics, young people made their mark on the 2019 elections by turning out to vote for new, progressive, pro-democracy parties. But they were thwarted in part by a military-drafted constitution that enabled the generals to keep hold of power via the Senate led by an unelected Prime Minister.
While the military-backed ruling coalition promised to restore stability to a nation rocked by decades of coups and political crises, many of the country’s young people feel Prayut’s government has done little to improve their economic prospects, restore democracy, or build confidence in the people.
“There are so many injustices in this country,” the high school student said. “The poor are getting poorer, how can people without enough money afford good education. It is impossible.”