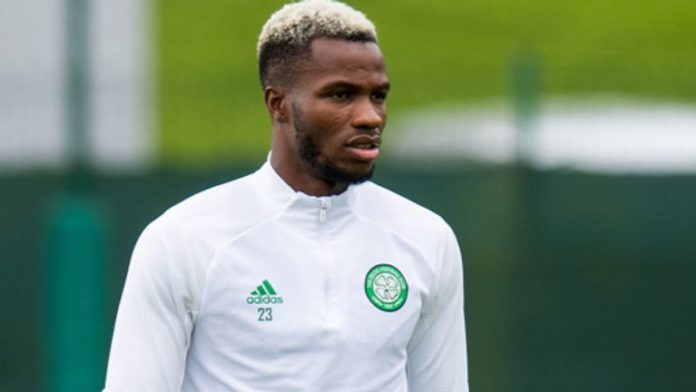 Neil Lennon says he is “not aware” of a loan bid from French club Amiens for Celtic defender Boli Bolingoli, who recently broke coronavirus rules.

The Ligue 2 side have launched a loan offer which includes an option to buy at the end of the season for £2.3m, while the Hoops are already targeting replacements, with Leeds left-back Barry Douglas high up on their shortlist as they look to offload the 25-year-old.

Bolingoli left Parkhead chiefs and manager Neil Lennon furious after travelling to Spain earlier this month, failing to tell the club and quarantine.

Dundee U vs Celtic

He featured in the 1-1 draw with Kilmarnock on August 9, before admitting to Lennon that he had been to the ‘high risk’ country, which has since led to Celtic facing disciplinary proceedings from the Scottish Professional Football League.

However, Lennon said on Monday that he was not aware of any bid as the Scottish champions prepare to face Dundee United on Saturday – live on Sky Sports Football – looking to catch up with table-toppers Rangers.

“No, not that I am aware of,” Lennon said when asked if there had been any approaches for Bolingoli.

Quizzed on if the Bolingoli issue had been dealt with, and if he had a future at Celtic, Lennon added: “There’s no sort of conclusion on that as of yet, but there will be.

“I’ll have to take a view [on his future] – I can’t give you a definitive answer yet. [I’m] disappointed for the club. I think we have been at the forefront of getting the game up and running.

“All the procedures, all the protocols, and it is down to the actions of one individual really. But we will hold our hands up, if we are accountable, we will have to accept that, take it and move on.

“What we don’t want is the game to shut down again or any sort of mishaps, if you want to call it that. Two clubs, Aberdeen and ourselves, embroiled in this.

“I think it is unfortunate from my point of view as a manager, the majority of the players here and the staff and people at the club have worked really hard, tirelessly, so we will try to set the highest standards we can.”

Lennon says the Switzerland international will be in the squad for Tuesday’s Champions League qualifier against KR Reykjavik.

“He’ll be in the squad but he’s not ready to start,” Lennon said. “He has a little bit more work to do. He’s only been here a couple of days and has done some training with the boys and a little bit extra fitness work.

“He trained well this morning and I think he’ll be a very good signing for us going forward. He’s a natural goalscorer and he’s a good centre forward.”

Lennon stressed that reaching the Champions League was one of the club’s priorities this season.

“Reykjavik played on Friday and before that they had a shutdown but, for me, the game is all about us. We are at home, it is one leg. The preparation has been good even though we missed out on a couple of games.

“We have given plenty of respect to Reykjavik but we are expecting a strong performance from ourselves.”