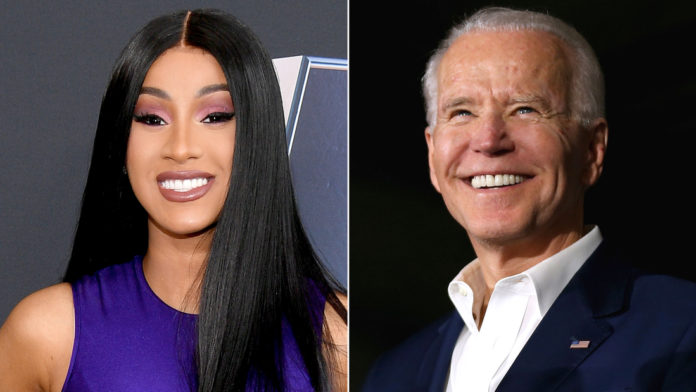 The rapper, who is riding high on the charts right now with her and Megan The Stallion’s collaboration “WAP,” sat down with the presumptive Democratic presidential nominee Joe Biden for Elle magazine.
Even Cardi B seemed unable to believe it was happening, saying at the beginning of the virtual chat, “Oh, snap. Is this real?”
After Biden got her to call him Joe and introduced her to his daughter, Ashley, who he said was a fan, he joked that he and the rapper might be related as his daughter’s nickname for him had been “Joey B.”
He also congratulated Cardi B on landing the cover of Elle magazine and thanked her for her “generosity in dealing with people suffering from COVID” before the rapper launched into her questions.
“I have a whole list of things that I want our next president to do for us,” she said. “But first, I just want Trump out. His mouth gets us in trouble so much.”
The “I Like It” star said she doesn’t want to be lied to, wants a president “to tell me what the steps are for us to get better,” as well as free college tuition, free Medicare and “laws that are fair to Black citizens and that are fair for cops, too.”
“There’s no reason why we can’t have all of that. Presidents have to take responsibility,” Biden responded. “I understand one of your favorite presidents is Franklin Roosevelt. Roosevelt said the American people can take anything if you tell them the truth.”
The married mom of a two-year-old daughter, Cardi B also delved into the importance of child care and the ongoing strife in the US.
“I feel like this country is so hurt, to the point that this year, a lot of people couldn’t even celebrate July 4th, because not everybody feels like an American,” she said. “A lot of people feel like [they’re] not even part of America.”
Biden agreed.
“One of the things that I admire about you is that you keep talking about what I call equity — decency, fairness, and treating people with respect,” he praised Cardi B.
The pair also talked about the importance of voting and Biden vowed that if he is elected and makes mistakes, he will own up to those mistakes.
Cardi B said she’d like to see that.
“Just check me out; I’ve never broken my word,” Biden said. “Never in my life.”
The rapper is not new to sitting down with aspiring presidential candidates.
She famously chatted with Bernie Sanders in 2019 and has expressed interest in political aspirations of her own.