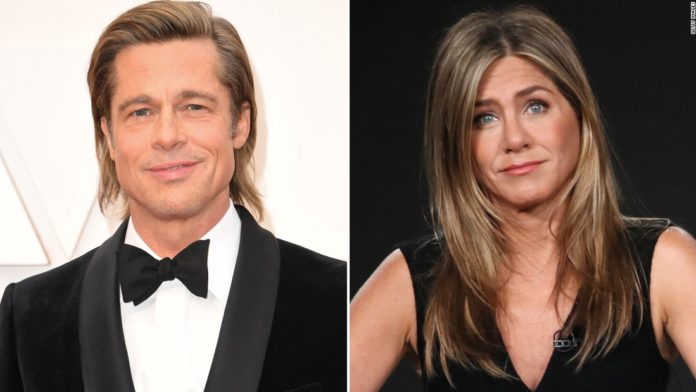 Exes Brad Pitt and Jennifer Aniston are among the many famous faces who have signed on for Dane Cook’s “Feelin’ A-Live,” a virtual table read of the 1982 film, “Fast Times at Ridgemont High.” The film was the breakout role of actor Sean Penn, who is also taking part.
Aniston’s long-time pal and late-night host, Jimmy Kimmel, is on board, as well as Morgan Freeman, Shia LaBeouf, Matthew McConaughey and Julia Roberts.
This is not the first time that Aniston and Pitt have reunited. They nearly broke the internet during the past awards season when they hugged backstage at the SAG Awards, after Aniston won the award for outstanding performance by a female actor in a drama series.
Aniston and Pitt were married in 2000 and divorced in 2005.
According to a press release, the livestream event is an “unrehearsed, anything-goes table read.” It will raise money for Penn’s nonprofit, CORE and the REFORM Alliance.
“Fast Times at Ridgemont High” was written by Cameron Crowe, who adapted from his 1981 book of the same title. Crowe went undercover at a California high school and wrote about his experiences.
Penn gave a memorable performance in the movie as Jeff Spicoli, a perpetually stoned surfer dude. The cast featured a number of then-unknown young actors, including Nicolas Cage, Phoebe Cates, Anthony Edwards, Jennifer Jason Leigh, Judge Reinhold, Eric Stoltz and Forest Whitaker.
The event will be livestreamed on Friday at 8 p.m. ET on CORE’s Facebook page.