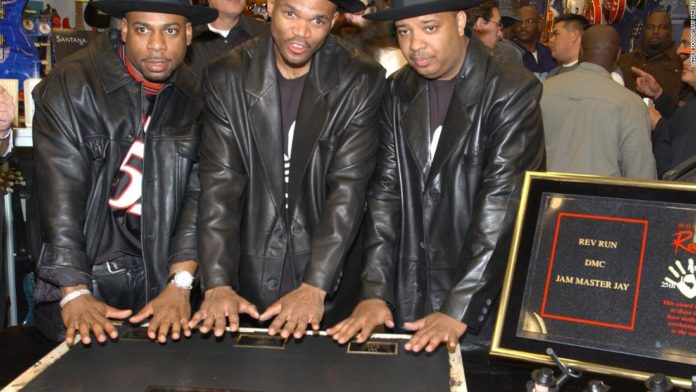 “Although this latest news opens up a lot of painful memories for all of us who knew and loved Jam Master Jay, I’m relieved to hear that 2 suspects have been arrested and charged with his murder,” McDaniels said in a statement. “It’s been a difficult 18 years not having him around while knowing that his murderers were not yet indicted for this heinous crime.”
McDaniels thanked the NYPD, New York City detectives, federal agents and other law enforcement involved in the case.
“I realize this is a first step in the judicial process, but I hope Jay can finally Rest in Peace. My love to Jay’s wife Terri, his sons, his family, his friends, and all of his fans. #JMJForever,” he said.
In their statement, Jam Master Jay’s son Jesse Mizell and the Mizell family thanked those who had reached out in support.
“Upon hearing this news, we have mixed emotions; we truly hope that these indictments are a solid step towards justice being served in the murder of Jay,” the family said. “We realize that there are other families out there who have lingering pain who continue to wait for their own closure, and we pray that this case gives them hope.
“In spite of all the tragedies we’ve seen this year alone, we take comfort in our family, our faith and in time’s ability to heal all. We can only hope that this news brings awareness to the fact that Black lives do matter.”
The statements came after prosecutors in the Eastern District of New York unsealed a criminal indictment Monday alleging that two men conspired to kill Jam Master Jay in retaliation for a drug dispute.
Jam Master Jay, born Jason Mizell, was fatally shot at a recording studio in the Queens neighborhood of Jamaica in 2002, when he was 37.

Charges are 18 years in the making

Seth D. DuCharme, Acting United States Attorney for the Eastern District of New York, said law enforcement never gave up on solving the cold case.
“It was important to us then and remains extremely important to us now to bring justice for the victim, his family, friends and the community that cared so much about those events,” he said.
The indictment purports to solve the killing of one of the most influential hip hop artists of all time.
In the early 1980s, Jam Master Jay teamed up with Run (Joseph Simmons) and DMC (McDaniels) to form the hip hop trio Run-DMC. With Jam Master Jay at the turntables as DJ, they became the first hip hop group to reach mainstream popular music success, solidified by the rap-rock crossover “Walk This Way” with Aerosmith in 1986.
Run-DMC was inducted into the Rock and Roll Hall of Fame in 2009 for their groundbreaking legacy.
“They broke down barriers for future rap acts, crossed boundaries between rap and rock and dispelled old notions of what rap could be,” the Hall of Fame said.
Jam Master Jay was killed shortly after the group released its 2001 album “Crown Royal,” and the group disbanded after his death.

The indictment alleges that Jam Master Jay was involved in transporting kilogram-quantities of cocaine between 1996 and 2002 alongside his music career.
In July 2002, he acquired about 10 kilograms of cocaine, which was intended to be distributed by Ronald Washington, Karl Jordan Jr. and others, the indictment states. But a dispute between Washington and a co-conspirator led Jam Master Jay to tell Washington he would be cut out of the transaction, the indictment states.
Washington and Jordan then conspired to kill him, the indictment states. On October 30, they entered Jam Master Jay’s recording studio with firearms, and Jordan fatally shot Mizell in the head and shot another man in the leg, according to the indictment.
Jordan and Washington are each charged with murder while engaged in narcotics trafficking and firearm-related murder.
Jordan, 36, also faces one count of conspiracy and seven counts of distribution of cocaine for alleged incidents in 2017. He was arrested Sunday and pleaded not guilty on Monday afternoon in a court appearance held via teleconference.
Washington, 56, is in federal custody and will be arraigned at a later date, prosecutors said. According to a detention memo, he was convicted in 2007 of Hobbs Act robbery conspiracy stemming from a string of gunpoint robberies in New York City and Long Island. He was sentenced to 210 months in prison and is scheduled to be released in April 2021, prosecutors said in the memo.