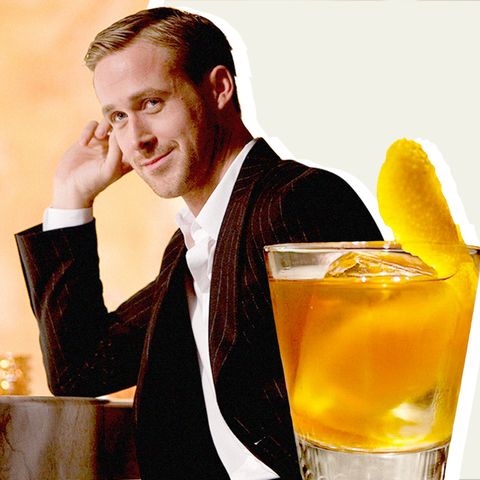 Hollywood usually gets cocktails wrong. Suave detective Nick Charles in 1934’s The Thin Man—probably the drinking-est movie of all time—is first seen instructing bartenders to shake a Martini, a shudder-inducing moment for Martini purists, who think the drink should be stirred. James Bond is no better in his many cinematic requests of “shaken-not-stirred” vodka Martinis. And let’s not even talk about all the foolishness Tom Cruise gets up to in Cocktail.

But at least one film got the Old Fashioned amazingly right. It was, strangely, the madcap 2011 romantic comedy Crazy Stupid Love, in which Ryan Gosling plays a slick womanizer and Emma Stone his latest focus. In his apartment, Gosling begins his seduction with an Old Fashioned made in expert fashion, complete with muddled sugar cube, jiggered whiskey, good ice, and a large swath of orange peel. The glossy scene, which lasts roughly ten seconds, looks like an ad for craft cocktails. Who made this happen?

Eric Alperin, that’s who. Alperin is the co-owner of The Varnish in downtown Los Angeles and the recent co-author, with Deborah Stoll, of a memoir/cocktail book called Unvarnished: A Gimlet-Eyed Look at Life Behind the Bar. When it opened in 2009, The Varnish was the first important craft cocktail bar in L.A. and attracted an enviable clientele. One of its early patrons was an up-and-coming movie star.

“He lived downtown,” Alperin said of Gosling. “He had a loft there. He had his community. They would come in for drinks. We got to know each other.” One night, the actor asked Alperin (a former actor himself) to teach him to make a couple of cocktails. He was doing research for a man-about-town role he had taken on. “I said, ‘You better make classics. A man’s drink is an Old-Fashioned.’” Alperin judged that a character like the one Gosling was playing would undoubtedly favor Old Fashioneds.

Alperin took him to Bar Keeper, a cocktail gear boutique in Silver Lake, to shop for equipment. Gosling studied the bartenders at The Varnish and practiced his art both at the bar and at his home. “He got it right away,” said Alperin. “He just wanted to make it second nature, to get it into his body like he’s done it a million times over.”

And that’s how the greatest Old Fashioned in cinematic history came about.

“He just wanted to make it second nature, to get it into his body like he’s done it a million times over.”

Alperin, meanwhile, is the star of Unvarnished. Most cocktail books put out by bars are a collection of recipes with a vainglorious history of the saloon tacked on. Unvarnished is something different. More than any book since Toby Cecchini’s Cosmopolitan in 2003, it presents the bartending life in its warts-and-all fulsomeness. Chapter titles include “Vice” and “Top Ten Reasons Not to Date a Bartender.” (No. 4: “They Do Too Many Drugs.” No. 9: “Cheating.”) In one memorable sequence, three women Alperin had slept with end up at the bar at closing time. In another, he spends a day hobbling around the city (crutches are involved), because he can’t remember where he parked his car.

“Writing a recipe book wasn’t something I was super excited about,” said Alperin. “I thought about stories, coming from a theater background. I love the Kitchen Confidentials. I love the Heats. I wanted to write about the down and dirty.”

The book isn’t all low-life hi-jinks. Alperin was trained in the school of the legendary Sasha Petraske, who sparked the cocktail revolution when he opened Milk & Honey, a tiny speakeasy on New York’s Lower East Side, in 1999. Fittingly, there are chapters where Alperin gets deadly serious about ice and the nitty-gritty of perfecting bar service. There is also a witty and enlightening portrait of Petraske, a genius eccentric who wore a pocket watch that didn’t work, strategically left dry cleaning all over the world so he could travel light, and taught his staff to strike the Wonder Woman “power pose” (hands on hips, feet apart, chin up) before each shift.

“It was necessary,” Alperin said of the tribute to Petraske, who died tragically young in 2015 at the age of 42. “I owe so much to him. A lot of us in the industry do. He was my Kool-Aid, man.”

That a little of that Kool-Aid made it to the silver screen in the form of Gosling’s Old Fashioned is just a bit of Hollywood magic. And if you want to pull a Gosling yourself and become a master home bartender, well, the recipe is in the book.

Robert Simonson Robert Simonson writes about cocktails for The New York Times; his most recent book “The Martini Cocktail” was nominated for a James Beard Award.