Home Sport Lam: Love each other to combat racism 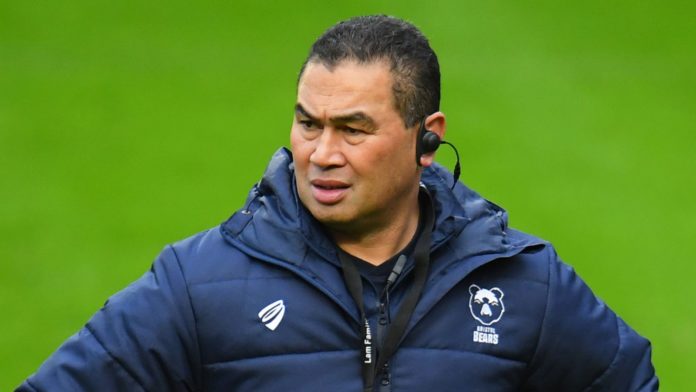 Lam: “What’s the solution? Well, with rugby against racism, start loving each other.”

Pat Lam discusses the Premiership’s communication regarding the Black Lives Matter movement, and his ideas to combat racism in sport.

After five months away, the Premiership restarted over the weekend, but unlike football’s Premier League where all players, officials and staff took a knee in support of the Black Lives Matter movement, Premiership Rugby left such decisions open to individual clubs.

Such a directive resulted in teammates from several clubs being divided on the field of play, and in public view, between taking a knee and not doing so.

Sale Sharks, in the first game back, saw four of their starting XV take a knee, but 11 not do so.

What has Lam made of the situation and how it has unfolded?

“I mean obviously, ideally everyone would be united and aligned in what they’re doing,” Lam told Sky Sports’ Will Greenwood Podcast.

“But when they [Premiership Rugby] came out and said you can do one or the other, my main thing was, like anything I do here, to put it to the players. It’s got to be driven by the players.

“Everyone has to feel comfortable.

“Ultimately and the big thing I’m pleased about is there is an awareness, and secondly the key alignment is that everyone in rugby is against racism. That’s the most important thing.

“Then when you start to get down to it, you have to respect every individual’s right to do what they want to do. You can’t force people to do things.

“The number one thing when I put it to the guys, is I love the fact that they chose and wanted to express our culture around love. And they were all unified.

“As I listened to them, I was buzzing at the maturity of the group and the reflection of who we are.

“Here’s the problem, but what’s the solution? Well, with rugby against racism, start loving each other.

“We defined love as making a bit of sacrifice, and sacrifice yourself for the benefit of others.

“And we said on the field, when older guys are looking after younger guys in terms of game-plan, that’s a bit of love.

“We see our team as extremely multi-cultural, and it’s emphasised by me right at the very beginning.

“Because I honestly don’t care. I came through rugby in the sense where in New Zealand, it’s not perceived as the rich man’s game.

“I don’t care what school you went to, what colour you are, no one is bigger than anyone else.

“The way we treat each other is the most important thing. So it’s great that it’s out there, certainly we’re aligned on racism.

“But it could have been done more aligned across the clubs.”

Sky Sports Rugby duo Will Greenwood and Rupert Cox also gave their viewpoints on the Premiership’s restart this week, and the views from around the grounds pre-kick off.

“Look, one argument says it would be much easier if Premiership Rugby said: ‘Lads, can you all do this?’, and everyone would adhere to it,” Greenwood said.

“The other side of it is you offer the individual the ability to make their own choice about how they would like to represent themselves and a movement that has flown round the world and found real traction. And rightly so.

“And you’ll remember the words of Michael Johnson on this very podcast, where he said: ‘Silence is compliance.’

“But that doesn’t mean not taking a knee means you’re racist.

“I don’t want to go into the individuals, but if you’re going to ask me would I have taken a knee? Yes I would have.

“But I also go back to, why should Premiership Rugby dictate to people, who are very capable of making their own decision, on a very important matter?”

Rupert Cox replied: “I’d imagine an answer to that – why should a governing body say what should happen – is because it shows leadership, because they are the guardians of the game.

“I guess what I’m interested in is why you would take a decision not to take a knee.”

Greenwood: “Leadership is allowing people their own voice, their own ability to communicate and be heard.

“If you’re looking at it from that perspective, the easy thing was for Premiership Rugby to say you’re all doing this, but when it is such a big issue, surely the individual has done enough research and it gets to a point where they are comfortable being seen what they are doing at a particular moment in time?”

To listen to all that and much more click play above for the latest edition of the Will Greenwood podcast!