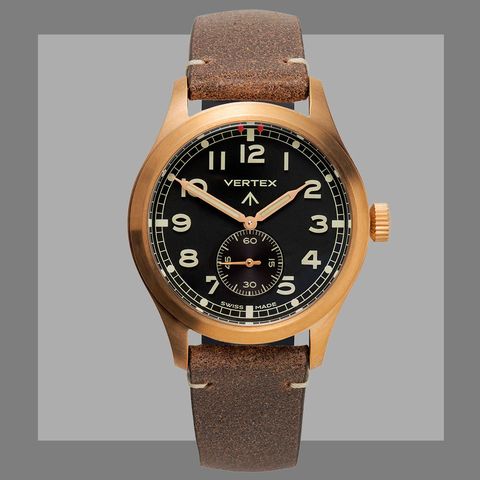 In the annals of military watchmaking, you’d think the beefier the watch the beefier the glory. While that may be true of divers and pilots, on the ground, the most celebrated military watch for collectors is the army field watch of World War II, a simple, no-nonsense, black-dialed beater in a diminutive range of sizes (by today’s standards) between 35mm and 38mm in diameter.

To collectors, the Dirty Dozen is the grail, 12 near-identical watches that were created to strict War Ministry specifications for the British Army. Though issued to tens of thousands of soldiers, the army was crystal clear about who owned them from the outset. Heavily marked front and back with the government stores’ broad arrow logo (a device on British military hardware that goes back at least as far as the 16th century) and peppered with code numbers, these watches belonged to the government (and make no mistake about it). It is these markings which make the Dirty Dozen so collectible now. 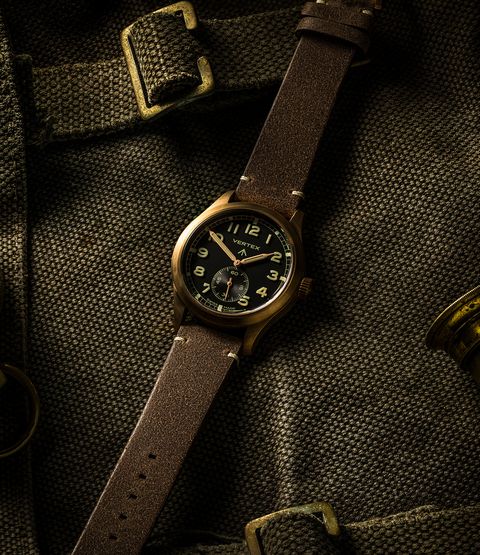 The Bronze 75 will develop a unique patina with wear.

That said, nabbing all 12 of these watches is the horological equivalent of climbing Mount Everest. In flip-flops. Twelve times. And for some it’s worth every step. Many of the names of the brands who supplied these watches in larger quantities—like Omega, IWC, and Longines—are of course watchmaking legends. Other smaller concerns didn’t make it through the quartz revolution of the ’70s and ’80s. However, Vertex, one of those brands that vanished, has resurfaced thanks to the single-minded vision of Don Cochrane, great-grandson of the founder Claude Lyons. 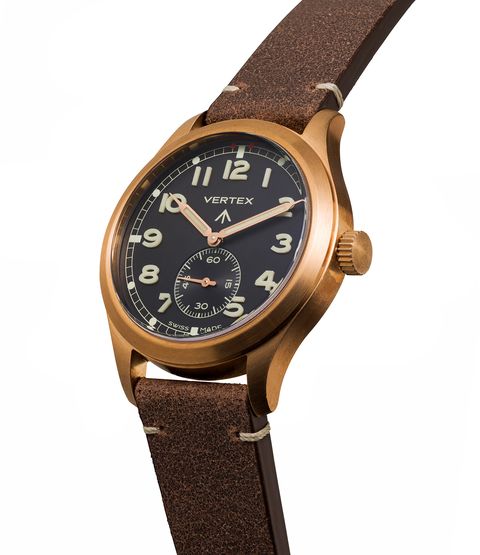 The watch features a 40mm diameter and an 11mm case thickness.

In 2017, 101 years after the brand’s founding in London, Cochrane revived Vertex and launched the M100, an update on the original Dirty Dozen watch, scaled up to a more contemporary 40mm diameter and with several upgrades to materials and performance to match. This week, to mark the 75th anniversary of the end of World War II, Cochrane has launched a special bronze edition of the M100, fittingly named The Bronze 75. Bronze naturally tarnishes over time, so each watch will take on a different—and very rugged—patina after a few months. 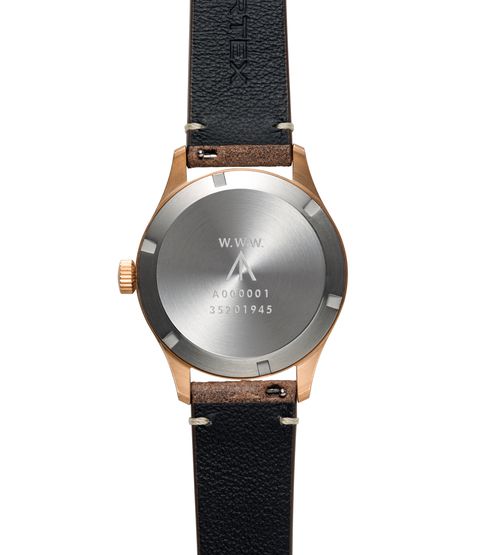 The “W.W.W.” on the caseback stands for “Watch, Wristlet, Waterproof.”

The watch—made in Biel, Switzerland—comes on a quick-release leather strap but is also supplied with an anniversary Zulu strap and a sandy khaki AF0210 cotton strap identical to the bog-standard military strap with which the original Dirty Dozen watches were issued. The case back of the 75 is a precise replica too of the numbered case back of the original Cal 59 of 1944 and ’45. The “W.W.W.” marked on it stands for “Watch, Wristlet, Waterproof.” Try saying that three times fast.