Home Sport Kruis: I still want to play for England 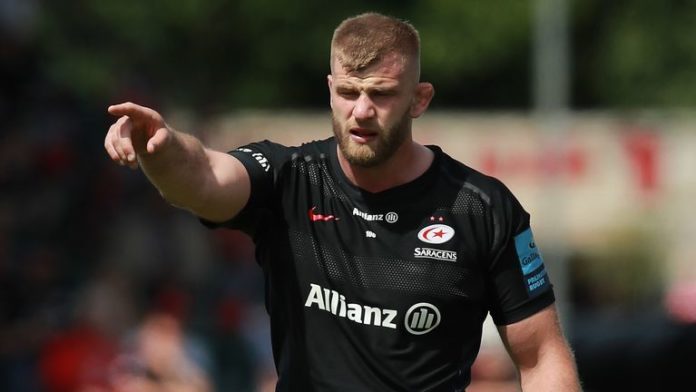 Kruis: “I know by going there (Japan) I have made my bed but that’s just a short period of my life, there is a bigger picture”

England and Saracens second row George Kruis is on the verge of a move to Japan where he has signed a deal to play for Panasonic Wild Knights. Sky Sports News reporter Gail Davis caught up with him to talk about why he’s making the move at the expense of his international career.

In a strange way George Kruis has enjoyed lockdown: “I Iike my own company” he said and “I had my dog”.

It gave him the chance to do what he hasn’t been able to for over a decade and that’s to just pause and briefly step off the treadmill.

Not the normal few weeks holiday shoehorned in before the next onslaught begins, but real time and unlike many of his team-mates whose season began with a World Cup camp last July, he is done.

The new bike and the well-worn weights in the garden suggest he’s not about to let himself go, in fact he’s still turning up to Saracens most days to train, but for once rugby isn’t the focus of Kruis’ day and he likes it.

He certainly didn’t want his time at Saracens to end like this but the last few weeks has reinforced his decision that taking some time out and heading off on an adventure is the right one: “I spoke to people in a lot of careers and after five or 10 years in the same place, it’s good to have a change-up.

“I really wanted to experience other stuff. I am unbelievably grateful and privileged to have experienced so much on and off the field with Saracens, they have treated me so well but maybe a product of that success is to want more and create new memories.

“My brother’s in Hong Kong and seeing how much he has grown since moving out makes me want it too.”

The decision to take some time away – Kruis will move to Japan and play for the Panasonic Wild Knights – was made a few years ago and England’s head coach Eddie Jones was privy to those early discussions.

“I have a very open and honest relationship with him and he said it will be an unbelievable experience,” Kruis added.

“Some players have had the chance to go off, like Joe Marchant who was in New Zealand recently, and I haven’t had that. I have been to Barking and Dorking which isn’t quite Japan and it’s an itch I just need to scratch.”

The move will be a lucrative one and he’ll play a fraction of the games played by Premiership players, but Kruis’ international career will temporarily be on hold while he plays in Japan.

“I’m still dead keen to be a part of it with England,” he said.

There is also a Lions Tour next year to also consider: “I know by going there I have made my bed but that’s just a short period of my life, there is a bigger picture.”

Last weekend, in the Daily Telegraph, former England captain Dylan Hartley talked about players being “chewed up and spat out by the sport” and the current generation of players being “crash dummies”.

“It’s a hard one,” said Kruis. “After this time off due to Covid there are now huge demands on the players, but equally they have to play their part in keeping the sport alive.

“I just hope welfare isn’t the first thing out the door, that welfare is at the forefront of people’s mind rather than some of the other bits of the game.

“I don’t think any player would want to play two games a week. I think we should be playing less games and maybe Covid means that can happen and we can restructure the seasons, but it’s tough to keep everyone happy.”

Rugby may never be the same, there have been wage cuts across the league, contracts that were there may not be anymore and there is, says Kruis, “a realisation which should be accelerated that people need more than just rugby”.

The second row already had a business degree and he put it into good use a few years ago setting up “fourfivecbd”, which sells products with cannabis oil that Kruis used for his rehab.

A big expansion into the wellness market is planned, so Kruis is in the office by 1030 every day. “I think taking a break, moving abroad or doing something different might become the norm, you might find it in people’s contracts if the sport continues the way it is.”

Kruis is hoping the break and the move keeps him fresh mentally and physically. He has signed a one-year deal with the option for another. But there’s only one place Kruis wants to play if he returns to England: “I am undercutting my deal, I better say sorry to my agent but if I came back it would only be with Sarries.”

But first for that adventure…