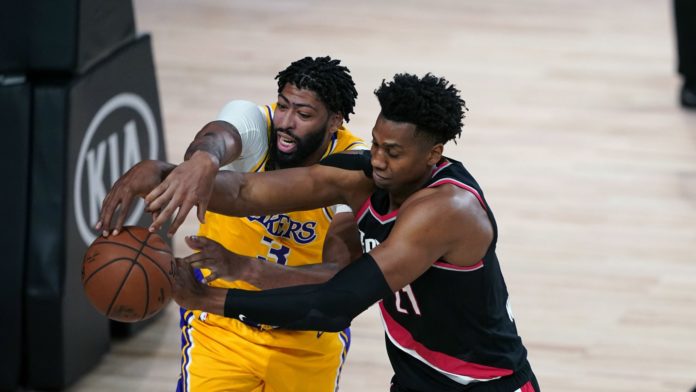 Anthony Davis finished with 28 points and 11 boards, while LeBron James had 23 points, 17 boards and 16 assists for the Lakers. Kyle Kuzma chipped in 14 points.

Gary Trent Jr’s three-pointer with 1:15 remaining gave the Blazers a 98-93 edge after a dunk by Davis allowed the Lakers to close within two. A slam by Nurkic sealed it for Portland, who have won seven of their last eight games in the bubble.

In the third quarter, Portland went up by eight before Los Angeles cut the deficit. A dunk by James pulled the Lakers within 78-75 heading into the fourth quarter. McCollum scored 11 of his points in the third.

For the game, the Blazers shot 39.2 per cent to 35.1 per cent for Los Angeles. The Blazers converted 13 of 34 three-pointers while the Lakers shot 5-of-32 from three-point range.

James Harden scored 37 points to lift the Houston Rockets to a 123-108 win over the Oklahoma City Thunder in Game 1 of their Western Conference first-round series. Harden shot 12-of-22 from the field and added 11 rebounds.

Without Russell Westbrook for the fifth time in six games, the Rockets had few problems getting going offensively, combining for 76 points in the second and third quarters.

After struggling from the field in the second quarter, going 2-of-7 from the floor and missing all four of his three-point attempts, Harden turned the corner in the third to help the Rockets extend the lead once again after the Thunder cut what was once a 21-point lead down to 10 four minutes into the second half.

But the Rockets finished the quarter with a 26-15 run which included six three-pointers, three by Harden, to take control for good. Houston finished with 20 three-pointers, six by Harden. Eric Gordon, filling in for Westbrook, had 14 of his 21 points in the second quarter.

Danilo Gallinari led the Thunder with 29 points. Chris Paul, who was traded from Houston to Oklahoma City for Westbrook in the offseason, added 20 after missing all five of his first-quarter shots. Paul also contributed 10 rebounds and nine assists.

Tyler Herro’s jumper with 8:52 remaining broke a tie and the Miami Heat ran away for a 113-101 win over the Indiana Pacers in the opener of their first-round Eastern Conference playoff series.

Jimmy Butler went for a game-high 28 points and Goran Dragic 24 – including four key hoops down the stretch – for Miami, who beat the Pacers for the second time in three meetings since the NBA restart. TJ Warren and Malcolm Brogdon finished with 22 points apiece for Indiana.

Neither team led by more than 10 points in a tightly contested first 39 minutes before Herro’s hoop ignited a 14-6 Heat burst that put them in command for good.

Dragic and Herro combined for all the Miami points in the burst, with Dragic hitting a pair of three-point hoops among 10 points. Down 101-93 with 5:20 to go, the Pacers got no closer than six the rest of the way.

Bam Adebayo recorded a double-double with 17 points and a game-high 10 rebounds for the Heat, while Herro, a rookie making his NBA playoff debut, chipped in with 15 points off the bench.

Warren, one of the leading scorers in the bubble, shot 9-for-18 overall and 4-for-5 on three-pointers. Brogdon, meanwhile, amassed a game-high 10 assists to complete a double-double with his team-high-tying point total.

Nikola Vucevic scored 35 points to propel the eighth-seeded Orlando Magic to a surprise 122-110 victory over the top-seed Milwaukee Bucks in Game 1 of their Eastern Conference first-round series.

Orlando got off to a fast start to take a double-digit lead, then held off the Bucks’ second-half runs.

The Bucks got within six at 99-93 on a spinning Brook Lopez finish with 8:13 to play, but Orlando answered with Terrence Ross’ driving dunk and DJ Augustin’ three-pointer to push its advantage back to double digits.

The Magic shot 49.4 per cent and made 16 three-pointers against a Milwaukee defense that was rated the NBA’s best during the regular season. Orlando reached those marks with second-leading scorer Evan Fournier held scoreless until hitting three key three-pointers late in the fourth quarter to help seal the win.

Ross finished with 18 points and six rebounds, while Augustin added 11 points and 11 assists for Orlando.