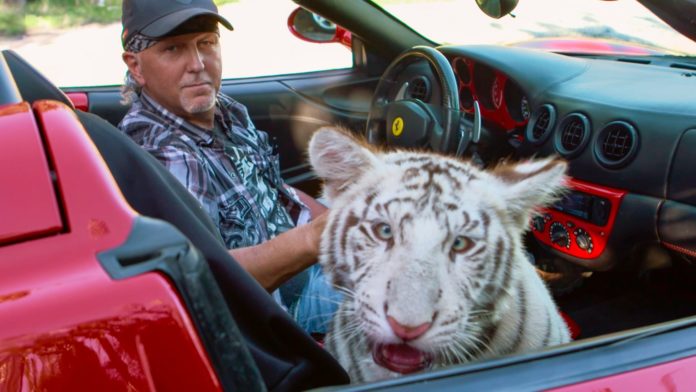 The big cat zoo made famous by the hit Netflix documentary series Tiger King has closed its doors to the public.

The Greater Wynnewood Exotic Animal Park in Oklahoma had previously been owned by the star of the show, Joseph Maldonado-Passage – also known as Joe Exotic – who is serving a 22-year jail sentence for his role in a murder-for-hire plot.

The current owner, Jeff Lowe, made the announcement on the park’s Facebook hitting out at animal rights charity PETA who he says have made “false accusations” against him.

Earlier this year, the zoo was handed to Big Cat Rescue owner Carol Baskin after a judge ruled that Joe Exotic had fraudulently transferred ownership to his mother.

He had done this in an attempt to avoid paying a $1m civil judgment successfully brought against him by Baskin for trademark and copyright infringements.

The June ruling stipulated that the current operators had to be out in 120 days.

Baskin also featured heavily in the Netflix documentary, and a clear rivalry was established between the big cat zoo owners.

Joe Exotic is currently in prison after being convicted of plotting to kill Baskin, who had tried to shut him down, and accused his zoo of abusing animals and selling big cat cubs.

In the documentary, he had raised questions about Baskin’s former husband, Jack “Don” Lewis, repeatedly accusing her of killing her husband and possibly feeding him to her tigers.

Baskin has not been charged with any crime and has repeatedly released statements refuting the accusations made in the series.

In his statement, Mr Lowe called Tiger King: Murder, Mayhem and Madness a “phenomenon” which he said “has brought us more attention than any human deserves, good and bad”.

He went on: “It has, and probably will continue to make us a target of every nutjob and animal rights loon in the world, but we are prepared.”

He said the zoo had “also provided us with an unfathomable source of income”, going on to confirm that “as of today, we have decided to close the old zoo effective immediately”.

Mr Lowe said he had returned his Animal Welfare licence to the United States Department of Agriculture, although he went on to say the agency had since suspended his registration.

Unlike in the UK, exotic animal ownership is legal in some states in America. In Oklahoma, it is legal to own wildlife as long as a licence has been obtained.

Mr Lowe said the animals in the park – largely from the big cat family – will continue to be cared for.

The post also revealed that the zoo would now serve an exclusive function: “Our new park will, at least for the foreseeable future, be a private film set for Tiger King-related television content for cable and streaming services.”

While a second series of Tiger King is rumoured to be on the cards for Netflix, the success of the show has also spawned a host of spin-off programmes.

One confirmed eight-part series will feature Oscar-winning actor Nicholas Cage in the role of Joe Exotic – an unlikely casting that suggests a TV show that will be impossible to look away from.

Earlier this month, it was revealed that Baskin was facing a lawsuit from the family of her ex-husband, Don Lewis, who went missing in 1997.